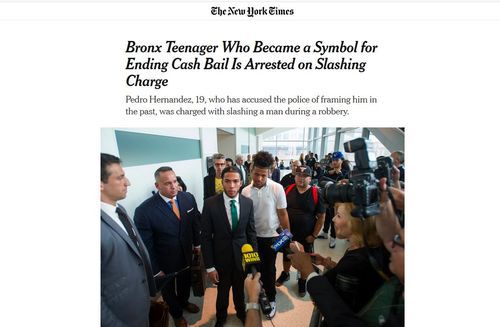 From the New York Times (I rearranged the order of the paragraphs):

Pedro Hernandez, 19, who has accused the police of framing him in the past, was charged with slashing a man during a robbery.

Mr. Hernandez’s legal troubles attracted national attention after he was arrested in connection with a shooting in the Bronx in 2015. The victim, a 15-year-old boy, survived and said he did not see who had pulled the trigger. But Mr. Hernandez was arrested months later, and the judge in the case set an unusually high bail of $250,000.

It’s not like the 15-year-old boy died from being shot. 15-year-olds are pretty tough. A mere shooting without a killing shouldn’t be a big thing for the police to get all worked up over.

Mr. Hernandez then became a cause célèbre for people seeking to abolish the cash bail system when he refused to accept a plea bargain that would have spared him jail time. Instead, he spent a year on Rikers Island, maintaining his innocence while a private investigator hired by his family worked to find evidence that could exonerate him.

The Robert F. Kennedy Human Rights foundation eventually put up the bail to free Mr. Hernandez, saying that Mr. Hernandez’s case exemplified the injustice of cash bail. (This year, the Legislature eliminated cash bail for most misdemeanors and nonviolent felonies.)

… The charges against Mr. Hernandez related to the shooting were ultimately dismissed in September 2017. Prosecutors said at the time that they lacked the evidence they needed, and that witnesses’ accounts were contradictory….

Still, he hoped he would be able to move forward with his education, his lawyers said. Mr. Hernandez had completed high school in jail, and he said he had wanted to enroll in college last fall. But those plans had to be delayed, his family said, because he and his sister were still facing charges related to an unrelated robbery in a schoolyard in 2015.

Mr. Hernandez sought to get those charges dismissed, too, and succeeded last October. On Tuesday, Mr. Spiro confirmed that Mr. Hernandez had enrolled in college.

But Mr. Hernandez’s problems with law enforcement had not ended. Hours before he was scheduled to meet Mr. Obama at a gala in Manhattan in December, Mr. Hernandez was arrested again. He was accused of driving a car while his driver’s license was suspended.

All these technicalities: driving without a license, robbery, attempted murder … The cops worrying about all that stuff is how you get Mass Incarceration.

… But on Sunday night, Mr. Hernandez, 19, was arrested again in the Bronx. The police said he was involved in a robbery and knife attack that left one mwith a gash on his face that required 15 stitches.

Mr. Hernandez’s lawyers suggested the police and prosecutors were targeting their client and interfering with his ability to build a better life. …

“If the system stays out of Pedro’s way, he is a unique kid with a bright future,” said Alex Spiro, Mr. Hernandez’s defense lawyer in multiple cases.