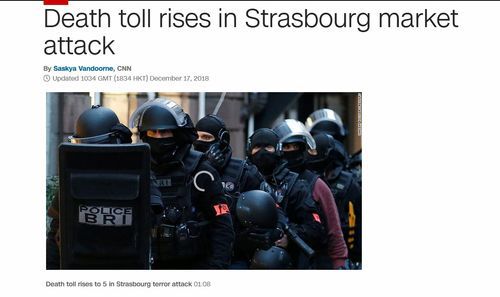 There is a fifth fataility from the Strasbourg terrorist attck, an attack that would have been headline news for days a few years ago but today is barely a blip on Twitter.

A fifth person has died from his wounds as a result of Tuesday's Strasbourg Christmas market attack, the Paris prosecutor's office told CNN on Sunday.

A gunman burst into the market in the evening hours Tuesday as crowds did their holiday shopping, killing three and wounding 13 more. The fourth victim, Antonio Megalizza, an Italian journalist who had been on life support since the attack, died on December 14, French authorities told CNN.
CNN affiliate BFMTV reported that a 45-year-old man visiting from Thailand, an Afghan father of three who had been living in France for 15 years, and a man from Strasbourg also died in Tuesday's market attack.
The authorities are calling the mass shooting a terrorist attack. Police killed the gunman Thursday night near the marketplace.
The shooter, Cherif Chekatt, was known to prison officials for being radicalized and for his proselytizing behavior in detention in 2015, Paris prosecutor Rémy Heitz said, adding that he had been incarcerated multiple times in the past. French prosecutors said the suspect shouted the Arabic phrase "Allahu Akbar," meaning "God is greatest," at the time of the attack.
[Death toll rises in Strasbourg market attack, by Syskya Vandoorne, CNN, December 17, 2018]

Again and again in these attacks, it emerges that the terrorist was known to authorities, as a recent study confirms.

At George Washington University, we have looked at 76 jihadist attacks in Western Europe and North America in recent years. We found that more than half involved perpetrators who had been on a security service watch list...

In France alone, the examples are plentiful.

But the actions of Western intelligence and law enforcement agencies are limited by a number of factors.

This helps explain why individuals who are well-known to authorities as "radicalised" are free to remain part of society and, at times, go on to carry out attacks.

The exact reasons vary from country to country, but two key overlapping factors prevent authorities from "doing something" about known radicals.

Firstly, legal protections in Western democracies prevent authorities from arresting individuals because of their beliefs.

There is a right to be a radical and to voice views that are aberrant to the majority.

Unlike in authoritarian regimes, expressing such views is not normally against the law.

Of course, this isn't really true. France, like other Western European countries, does not have free speech. A number of people have been tried for saying politically incorrect things in the Republic, including Marine Le Pen and Brigitte Bardot. But those are just Europeans, so the government can safely crack down on them. If the authorities took strong action against Islamic extremists, they would be accused of racism by journalists and likely lose their careers.

The second factor identified in the study that enables extremists to conduct attacks is "scare resources." In other words, there are now too many extremists to monitor.

French authorities currently list more than 20,000 individuals as Fiche S, the category used to denote radicalised individuals. This list included Cherif Chekatt, who was shot dead by police after they encountered him on a Strasbourg street on Thursday evening.

But to monitor all these people poses an insurmountable challenge. Round-the-clock, intensive surveillance of a suspect normally requires about 25 officials on any given day. 24/7 surveillance on all 20,000 Fiche S subjects would require half a million intelligence officials.

Of course, given this challenge, importing more Islamic extremists is probably a bad idea. But if you say something like that, well, the French government may suddenly find the "scarce resources" to crack down on you.