Dawkins On Islam And Trump—He Hates Both, But Hating Islam Is What's Got Him Banned 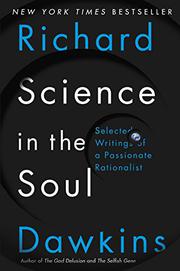 Richard Dawkins is an atheist, and his latest book is called Science in the Soul: Selected Writings of a Passionate Rationalist. When radio station KPFA cancelled him (see Sailer below) they said “We had booked this event based entirely on his excellent new book on science, when we didn’t know he had offended and hurt – in his tweets and other comments on Islam, so many people. " Of course, as an atheist, Dawkins has been saying bad things about Christianity, and especially about Christians skeptical of evolution, for years, but no on cares about that.

Why, by the way did they think he had written a "excellent new book on science"? It's not, it's a collection of polemical essays which includes attacks on the Muslim practice of telling suicide bombers they're going to Paradise. But I only know that from the Amazon "Search inside" feature—it won't be out until August!

KPFA is a liberal radio station in Berkeley. When I lived there, they were the good guys and I listened to their station almost every day. They were scrupulous in their fact-checking in those days – how sad that they have come to this: if they had done any fact-checking at all, they couldn’t possibly have come to the conclusion that I used “abusive speech” against Islam. The only only one of my tweets I can find this year, which could possibly be called abusive, is nothing to do with Islam. As follows:

“Ashamed to be American?” Don’t be. The majority of you voted against this narcissistic, xenophobic, vainglorious, ignorant 2-year-old. "

To which Coyne added "This was of course about Trump."

Anyhow, Dawkins has been abusive   about the horrors of Islam in the UK and elsewhere, and if, in fact,   none of them were literally in the Current Year  that doesn't bother SJWs. Here's a collection: 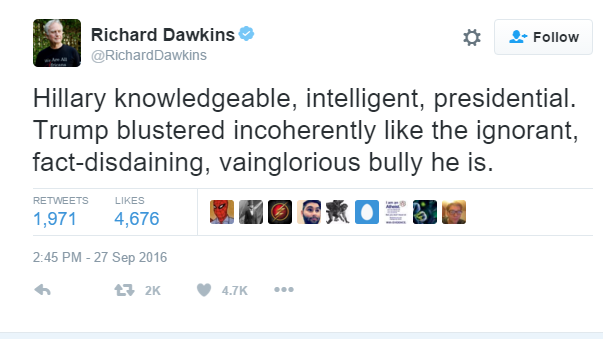 I wonder if he knows that Hillary is an (apparently genuine) Methodist? (See Hillary,The Religious Left, and the Wall Street Journal.) Or for that matter, how friendly she is to militant Islam.