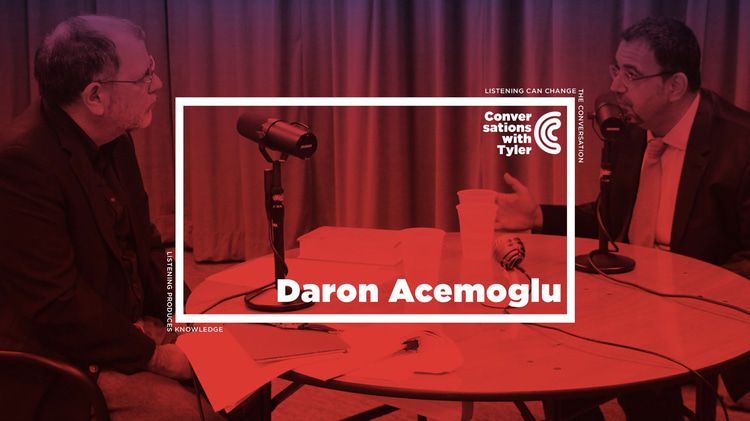 Daron Acemoglu vs. Tyler Cowen on Why Northern Countries Are Richer Than Tropic Countries

A transcript of a conversation of economist Tyler Cowen interviewing economist Daron Acemoglu on his theory that rich countries are rich because they were bequeathed better Inclusive Institutions than were poor countries, which got stuck with Extractive Institutions:

COWEN: I have so many questions about economic growth. First, how much of the data on per capita income is explained just simply by one variable: distance from the equator? And how good a theory of the wealth of nations is that?

Singapore is at only 1 degree north. But, yeah, it’s kind of famously exceptional. For example, most of the population is not indigenous but from further north in China.

By the way, I believe the overlooked thesis of Ryan Coogler’s Black Panther movie is that if white people had only left sub-Saharans only for longer, such as thousands more years, Wakanda would have emerged in the snowy highlands of southern Africa in a place like Lesotho as blacks adapted to the challenge of winter. I was impressed.

ACEMOGLU: I think it’s not a particularly good theory. If you look at the map of the world and color different countries according to their income per capita, you’ll see that a lot of low-income-per-capita countries are around the equator, and some of the richest countries are pretty far from the equator, in the temperate areas. So many people have jumped to conclusion that there must be a causal link.
But actually, I think geographic factors are not a great explanatory framework for understanding prosperity and poverty.

COWEN: But why does it have such a high R-squared? By one measure, the most antipodal 21 percent of the population produces 69 percent of the GDP, which is striking, right? Is that just an accident?

ACEMOGLU: Yeah, it’s a bit of an accident. Essentially, if you think of which are the countries around the equator that have such low income per capita, they are all former European colonies that have been colonized in a particular way.

So, for a variety of reasons — and geography might’ve played a role, though I’m not completely sure — European powers pulled ahead of the rest, and then they went ahead and colonized much of the rest of the world. Today, for about 120 countries, their current institutions are heavily shaped by their colonial experience, and the colonial episode has been very unequal for different countries.
If you take places such as the United States or Australia — they ended up with pretty good institutions, actually better institutions in many ways than their mother country back at home, because the settlers who got to live in these places pushed for better institutions, fought for better institutions. Australia was one of the more democratic places in the 19th century. The US, of course, introduced the smallholder society, much better than Britain.

But in most of the tropical areas, the conditions that Europeans encountered led them to adopt a very different colonization strategy, essentially for two separate but related reasons.

First, many of the more civilized and densely populated areas were in the tropics or near the topics: the Inca Empire, Aztec Empire, the Indian subcontinent with the Mughal Empire colonized by the British, the North African civilizations. And all of those created a much better opportunity for Europeans to set up what James and I called extractive institutions, to essentially control labor and use labor.

Moreover, the settlement pattern that was at the root of the better institutional development of places such as the US, Canada, Australia really was made impossible in most of these places because, associated with both climatic conditions and the dense population, they had vectors of diseases that were very, very different than the ones the Europeans were used to, so the mortality rates that Europeans faced were very different.

The combination of these two factors meant that the colonization experience was very different and the colonial institutions were very different in these places. And to a first approximation, all of that big gap between places such as US, Argentina, Chile, and places like Peru, Bolivia, India, Pakistan, can be explained by these different colonization strategies and their institutional implications.

In other words, in places that after 1492 were unhealthy for the indigenous population due to their lack of readiness to deal with Old World infectious diseases but were relatively healthy for Europeans, such as the U.S. and Australia, population replacement of the indigenes by Europeans led to the emergence of primarily European settler populations with even higher than European standards of living due to the large amount of land per person. For example, in the American colonies by the 1750s, the colonists had reproduced much of the technology of Britain, but, as Benjamin Franklin pointed out, had even higher living standards than Brits in the Mother Country because they had lower land prices and higher wages due to less dense population.

But some examples of this process wound up richer than others.

It might be useful to look at places not colonized by whites, such as Japan, Thailand, Tibet, Afghanistan, Ethiopia, and perhaps Tonga.

COWEN: As you know, there’s a famous paper by Comin, Easterly, and Gong showing there’s a reasonably high correlation between per capita income in AD 1500 and the current day, especially once you account for the movement of settlers. Is that because the quality of institutions is so stable over time, over more than 500 years? Isn’t that better explained by having the quality of human capital be more stable over time? That seems more plausible.

ACEMOGLU: Well, I think it’s a complex picture, actually. One of the papers that I wrote with James Robinson and Simon Johnson, which we entitled “Reversal of Fortune,” is exactly on that point. The raw fact is that, if you look at which are the places that are more prosperous in 1500, those turn out to be relatively less prosperous today.

Europeans in 1500 had printing presses and trans-oceaning sailing ships. What their standard of living was relative to other parts of the world is arguable, but their trajectory was less so. In particular, the movable type printing press was immensely important.

It’s not to say that they became less rich today. Every place in the world became much richer because of industrialization, because of much better technologies, trade and all of that.

But relatively speaking, it was places that were empty, without any urbanization, without much established road networks or agricultural surplus, such as Chile, Argentina, US, Canada — relative to the places that I mentioned a moment ago: Bolivia, Peru, Ecuador, Mexico, India, Pakistan — that actually became richer. So, that reversal of fortune is a prima facie evidence against a purely geographic explanation.

Or largely replaced the population in the U.S., Canada, Australia, and, to a lesser extent, New Zealand.

So a lot of the qualitative and the quantitative research that we have done puts much more emphasis and finds more support for the institutional interpretation. For example, if you take human capital, it wasn’t that Europeans brought human capital to the places such as the US or Argentina or Chile. Actually, the Europeans who were more educated were the ones who went to places such as the Inca Empire or the Aztec Empire.

Benjamin Franklin mostly self-educated himself in Boston and Philadelphia, so Franklin, who is perhaps history’s most broadly successful and useful human, doesn’t count as much in the way of human capital under Acemoglu’s definition.

COWEN: But they brought ideas. The Declaration of Independence was brought over by English and other European settlers. And that was a powerful intellectual validation.

ACEMOGLU: Absolutely. It was that idea —

COWEN: Native Americans were not producing the same, so —

ACEMOGLU: No, that’s why I’m saying that the whole European colonization episode has to be taken in its entirety. But it isn’t also a straight line to say that Europeans brought ideas and that’s what really changed the trajectory in a good way.

Europeans settled in some numbers in Barbados. In 1680, about 10,000 people in Barbados had European ancestry and probably about 2,000, 3,000 were British. But these people, who benefited mightily from the plantation complex and from about 40,000 people being chattel slaves, did not have any idea of introducing a Declaration of Independence. They actually established a very draconian regime. Executions were commonplace. All the power was concentrated in the hands of about 150 families that were to be plantation owners.

Barbados is a weird example for Acemoglu to cite of the horrors of Extractive Institutions imposed by European colonists because it’s widely acknowledged as one of the most successful black run countries in the world. In contrast, Haiti decolonized much earlier and much more violently than Barbados, and it’s a mess.

Here is Jared Diamond beating Acemoglu in a debate over Haiti.

… COWEN: Wait, you moved from Turkey to MIT, right? That made you much more productive.

ACEMOGLU: Exactly. I’m moving into an area with better technology and better institutions.

COWEN: But mainly better people to work with?

ACEMOGLU: Some better people to work with, but the better —

… COWEN: If you had to name two or three nonobvious nations to be bullish on, are there any picks you would make?

ACEMOGLU: That’s a great question. Well, I don’t know what nonobvious means —
COWEN: Denmark. Denmark will do fine, we can agree.

ACEMOGLU: In Latin America, I would pick Uruguay and Chile. …

I think Ethiopia is a great example to watch. …