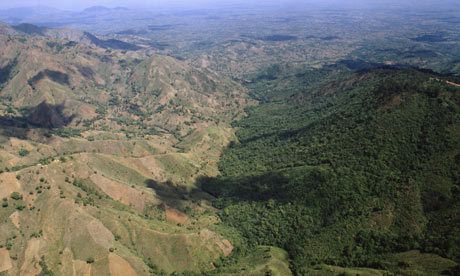 MIT economist Daron Acemoglu has a blog in which he advances his world-shattering insight that the reason some countries are poorer than others is because they have worse institutions bequeathed them by European imperialists. (Personally, I think he can take it a step further and point out that what's even more true of poor countries in general is that they have less money.) On his blog, Acemoglu searches out past examples of people who don't quite agree with him to show them the error of their ways.

For example, in Why Is Haiti So Poor? Acemoglu and James Robinson dismiss all non-institutional reasons for why Haiti is poorer than the adjoining Dominican Republic, such as that Haiti has a more African culture (voodoo, zombies, etc.) that the D.R. (And of course, that almost all the white people in Haiti, men, women, and children, were systematically massacred in 1804 might have something to do with Haiti's subsequent lack of economic dynamism, but that's the wrong kind of institutionalism for Acemoglu to even mention.)

Acemoglue particularly doesn't like Jared Diamond's more broadbased comparison of Haiti and the Dominican Republic in Diamond's 2005 bestseller Collapse, which includes an explanation of how prevailing winds, topography, rainfall patterns, population density, land ownership patterns and politics, have worked together to make Haiti one of the most deforested and eroded countries on earth while the D.R. still has much forest cover. (The aerial picture above shows Haiti on the left, the Dominican Republic on the right.)

Diamond’s comparison of the differing fates of Haiti and Dominican Republic, both in Collapse and after the Haitian earthquake reads like 40 proof crimethink compared to Acemoglu/Robinson’s embarrassing handling of the same subject. Diamond even mentions that the megalomaniacal mixed race D.R. dictator Trujillo’s policy of whitening the D.R. population by recruiting European immigrants (Trujillo was the only national leader enthusiastic about bringing in German Jewish refugees in the late 1930s), has helped the D.R. relative to Haiti. Acemoglu’s head would explode if that thought ever lodged in his brain! It doesn’t even occur to Acemoglu that the massacre of most of the whites in Haiti after independence might have hurt Haiti’s future economic development …Here’s what Jared Diamond wrote in The Guardian (of all places) after the Haiti earthquake in 2010 on why the Dominican Republican isn’t as impoverished as Haiti:

“A second social and political factor is that the Dominican Republic – with its Spanish-speaking population of predominantly European ancestry – was both more receptive and more ­attractive to European immigrants and investors than was Haiti with its Creole-speaking population composed overwhelmingly of black former slaves. … Hence European immigration and investment were negligible and restricted by the constitution in Haiti after 1804 but eventually became important in the Dominican Republic. Those Dominican immigrants included many middle-class businesspeople and skilled professionals who contributed to the country’s development.”

Okay, the basic difference between Diamond and Acemoglu is that Diamond is smart enough and well-informed enough that his political correctness is fairly disingenuous. His Guns, Germs, and Steel

megaseller was a big step backwards in brilliance of insight from his earlier The Third Chimpanzee; but creating an elaborate rationalization for political correctness in GGS at least made him a rich man. He dodged debates with his best-informed critics because he understood the weaknesses in GGS. And, if you read his later stuff carefully, you can notice subtle signs that he’s actually a more heterodox thinker than GGS would suggest (e.g., a close reading of “Collapse’s” complaints about the effects of immigration into America and Australia on the environment shows he's a closet immigration restrictionist).

In contrast,while Acemoglu’s political correctness certainly has promoted his career, as far as I can tell, though, Acemoglu is a True Believer. He comes across as being wholly untainted by the slightest doubts in the conventional wisdom.

It's actually rather amusing to see the newer generation of True Blue dopes turning on the aging cynics who taught them too well.