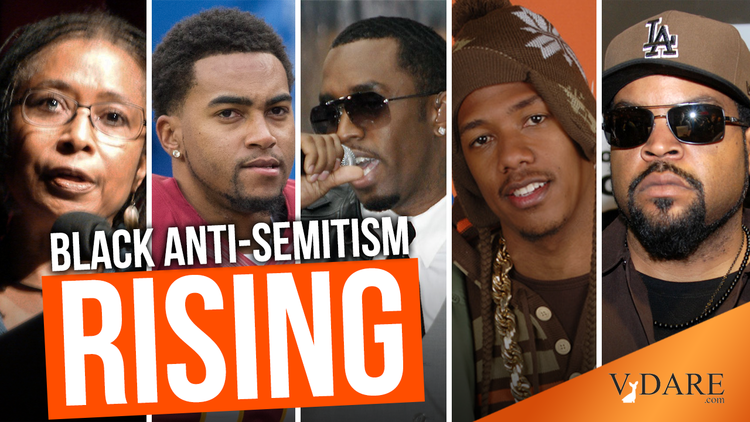 Earlier: Black Celebrity Says Caucasians Lack the Melanin to be Compassionate, Gets Cancelled (But Not for That)

The Disturbing Rise of Anti-Semitism Among Black Celebs

Often, we discuss conspiracy theories as if they are kooky yet benign tales spun by our neighbors, acquaintances, and even friends. But in America’s current political and cultural configuration, prejudice combined with ignorance often masquerades as legitimate thought and leads to devastating outcomes (just see how Floridian COVID-19 deniers are doing now). And in a society marked by incessant high-speed information and spin, anecdotal and instinctual bias becomes the basis of bad-faith arguments about free speech and a “marketplace of ideas.” As much as social media has brought us smart thinking by typically marginalized voices, it’s also allowed careless people with big platforms to speak more loudly—and without the immediate intervention of the wiser and better-informed people who may (or may not) surround them.

… There is a huge difference between critiquing whiteness—a racist fabrication with undeniable social consequences—and denigrating Jewishness. Anti-Black racism (as well as anti-Arab racism) as practiced by Jewish institutions and individuals ought to be critiqued where observed, but on the basis of white assimilation and imperialism, not on the basis of Jewish identity. Scapegoating Jewish people—rather than challenging harmful institutions formed and led by people of any identity—plays directly by the facist [sic] rulebook.

But conspiracy theories often serve as a salve to incurious and unresilient people, even as the greatest conspiracy of all—racism—hides in plain sight. And it finds its way to even those of us directly harmed by its systemic manifestations. Like anti-Black and transphobic violence, anti-Semitic hate crimes have undeniably been on the rise since Trump’s inauguration. A viable counter to the bad and dangerous ideas that fuel this violence is deeper and more rigorous reading; … Perhaps we still look to confused people like Ice Cube and Diddy because so many of us have refused to read, share, and discuss the vital work of critical thinkers like Angela Davis and Noel Ignatiev.

The last big whoop-tee-doo over blacks, in the early 1990s, was more or less canceled because black anti-Semitism started getting scary. Will that happen again?

It’s going to be an important question whether Jewish progressives can thread the needle and convince black celebrities to only blame whites and never blame Jews. So far, they haven’t gotten much backtalk on this out of the affirmative action beneficiaries of the Great Awokening, who tend to be women, gays, or dweebs (TNC) who grasp the Rules about who they should and shouldn’t criticize because they know their funding can be cut off.

The problem is typically, in contrast, with more obstreperous blacks whose careers are more based on appealing to other blacks. When The Establishment declares this to be Black Festivus and thus the time for the Airing of Grievances, many actual black celebrities, especially the straight men, are likely to spout off on the basis of personal grievances or racial grievances over business.

For example, Spike Lee was going to be the Black Woody Allen up until his 1990 movie Mo’ Better Blues satirized Jewish music managers, and then he didn’t get his Oscar for 28 years.