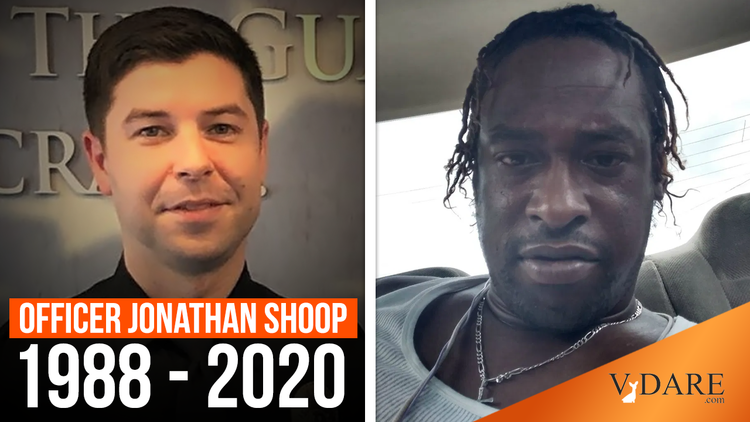 From the Seattle Times, some distinctly non-national news

A judge found probable cause Wednesday to hold a 37-year-old man on investigation of first-degree murder in connection with the shooting death of Bothell police Officer Jonathan Shoop on Monday night.

King County District Court Judge Joe Campagna also found probable cause to hold Henry E. Washington on investigation of first-degree assault for allegedly shooting and injuring a second officer; vehicular assault for allegedly hitting a man on a scooter with his vehicle; and attempting to elude police.

Then in the 8th paragraph:

A witness shot video that shows Washington outside his car as the patrol vehicle approached the intersection and stopped, the statement says. Other witnesses later told police the driver yelled, “Come on, pigs,” as he quickly moved around the front of the patrol car and fired two shots into the police SUV through the driver’s-side window, according to the statement. …

Police say Washington claimed he shot the officers in self-defense to keep them from taking his vehicle, marijuana and gun, according to the statement.

What does BLM want? In the minds of many of its most excitable supporters, a growing assumption appears to be: Black Impunity. To avoid arrest, excuse me Blacks should have a right to kill cops.

As somebody on Twitter pointed out to me, a certain percentage of black martyrs (e.g., Michael Brown, Rayshard Brooks) assume that life is like the Grand Theft Auto game in which if a policeman stops you, you can steal his weapon and try to shoot him with it, then just go home and lie low for a few days until the cops forget all about it.

Or, at minimum, BLM advocates increasingly believe that blacks should simply be let go if they don’t feel like cooperating with arresting officers. For example: