Here in Mexifornia, we are galloping headlong into a future many of us never wanted and have tried to prevent.

The state's recent history of immoderate immigration has created a bad case of overpopulation, which in turn has affected daily life in numerous ways, from longer commute times to earlier water restrictions during droughts. Public transportation (which we are exhorted to use, rather than cars) is now far more crowded as a result also.

The Bay Area Rapid Transit system (BART) is getting a little threadbare, and its leadership think a fleet of new, redesigned cars are the ticket. However, increased capacity, rather than comfort, is the guiding principle. [BART lays out ambitious plans for new railcars, San Francisco Chronicle, May 8, 2009]

BART is set to embark on a $3.4 billion project to replace its existing trains with 700 new cars that will carry more people, move passengers through stations faster, and meet the needs of suburban and urban riders.

"This is a significant undertaking for this agency, one we don't even make every generation," BART General Manager Dorothy Dugger said Thursday. Many of the 669 BART cars now in service have been running since the system opened in 1972. [...]

The agency has released a handful of conceptual designs, some of which show a very different BART car than what's now in use. In the most dramatic example, a row of poles runs down the middle of the train. Attached to the poles are pads on which passengers can lean. [...] 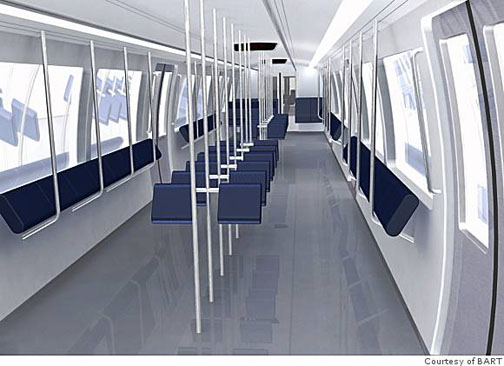 The unmentioned problem here is unrestrained population growth, fueled by immigration run amok. As I wrote in Paradise Lost: Crowdifornia 2008, the BART system has seen the world change around it.

BART, the regional rail system that is carrying more passengers on a typical weekday than ever before, has been quietly removing seats from trains to make room for even more riders.

Soon we can rename the system Bay Area Standing Transit.

In 1970, when BART was being completed, the population of the nine counties comprising the San Francisco Bay Area was around 4.6 million; as of 2006 we were a crowded 7.1 million.

We northern Californians will be in even closer proximity to diversity, since we will be experiencing it sardine style, SRO on the new improved BART cars.