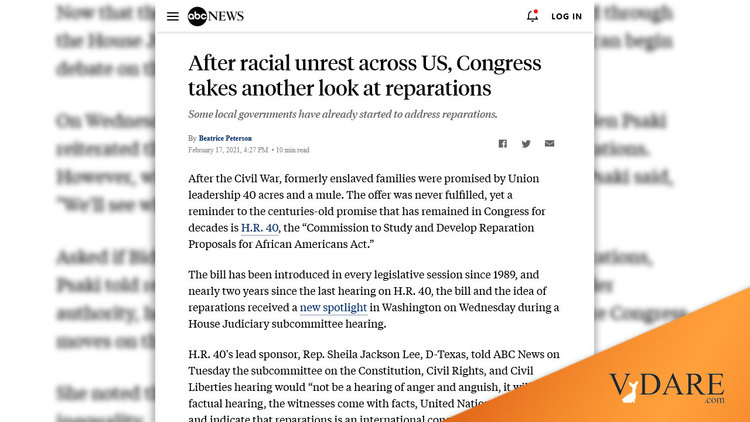 Earlier: A Reader Suggests Making Reparations An Option On Tax Returns, And See Who Pays

After racial unrest across US, Congress takes another look at reparations

Some local governments have already started to address reparations.

… The bill seeks to establish a commission to study “and consider a national apology and proposal for reparations for the institution of slavery, its subsequent de jure and de facto racial and economic discrimination against African Americans, and the impact of these forces on living African Americans, to make recommendations to the Congress on appropriate remedies, and for other purposes,” according to H.R. 40’s text.

Since the last time a hearing was held on H.R. 40 in 2019, Speaker Nancy Pelosi has publicly announced her support for reparations. Jackson Lee notes that H.R. 40 has garnered the support of 170 members of Congress and 300 organizations, including the U.S. Conference of Mayors, NAACP and ACLU. However, in the three decades since the bill was first introduced, it has yet to reach the House floor for a vote.

On Wednesday at a White House press briefing, press secretary Jen Psaki reiterated that President Joe Biden supported the study of reparations. However, when asked if he would support a bill on reparations Psaki said, “We’ll see what happens through the legislative process.”

… “We don’t need a study to take action right now on systemic racism so he wants to take actions within his own government in the meantime.”