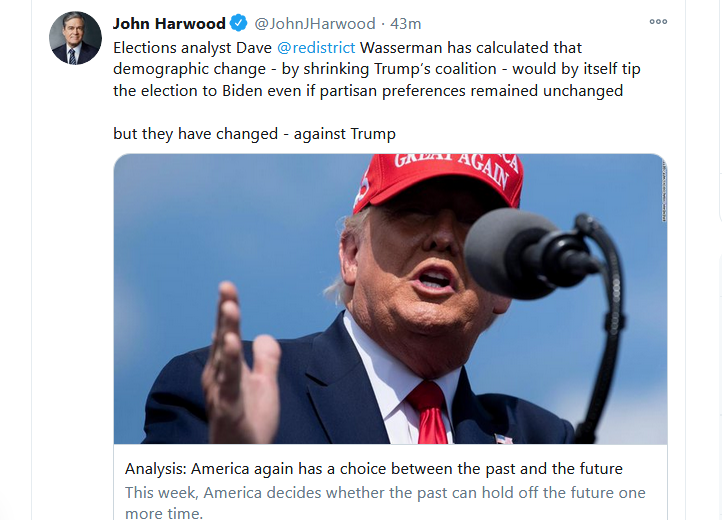 CNN: Remember That Paranoid Conspiracy Theory About How The Democrats Were Importing Foreigners To Win Elections? Well ... Bwa-Ha-Ha-Ha-Ha-Ha!

Earlier: A Reader Is Frustrated By NYT's "Great Replacement" Doublethink

America again has a choice between the past and the future

(CNN)This week, America decides whether the past can hold off the future one more time.

It happened four years ago when Donald Trump scored an Electoral College victory with his turn-back-the-clock campaign to Make America Great Again. He’ll have trouble pulling it off again.

That’s partly because the pace of demographic change keeps shrinking the America Trump evokes in the rear-view mirror.

More than that, his presidency has exposed the inadequacy of yesterday’s prescriptions for the challenges America now faces.

Anxiety about change played a central role in putting Trump in the White House. As the first Black president, Trump’s predecessor Barack Obama embodied the population shifts that the Census Bureau says will turn Whites into a minority of the American population within a quarter-century.