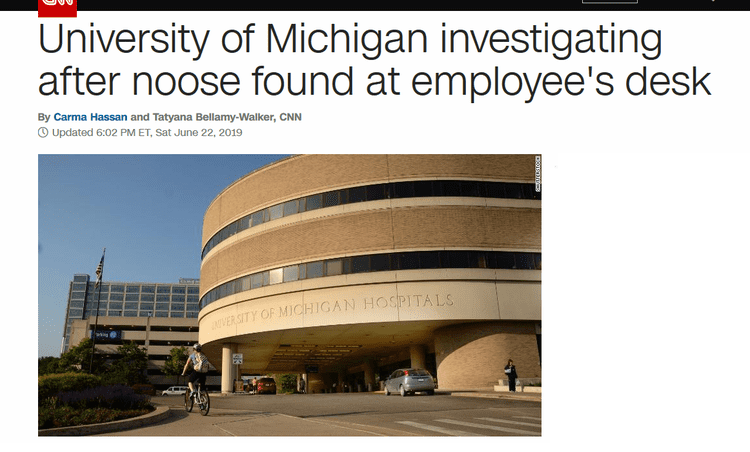 (CNN) University of Michigan police are investigating after a noose was found on an employee’s desk at a university hospital.

The university has “taken immediate action” to investigate the incident that occurred Thursday as an act of discrimination and criminal ethnic intimidation, said Dr. Marschall S. Runge, the dean of the University of Michigan Medical School.

"This act of hate violates all of the values that we hold dear and will not be tolerated,” Runge said in a statement, calling the noose a “symbol of hate and discrimination.”

Heather Young, a university police spokeswoman, told CNN the desk is “a shared workspace, shared by multiple people,” and it’s “difficult to answer” questions about the race or ethnicity of the employees who use it.

Video surveillance recordings may be helpful in the investigation.

After all, who can forget the thousands of video surveillance recordings on Youtube showing white male racists hanging nooses to intimidate the Intersectional, such as Jussie Smollett.

There are thousands of videos, aren’t there?