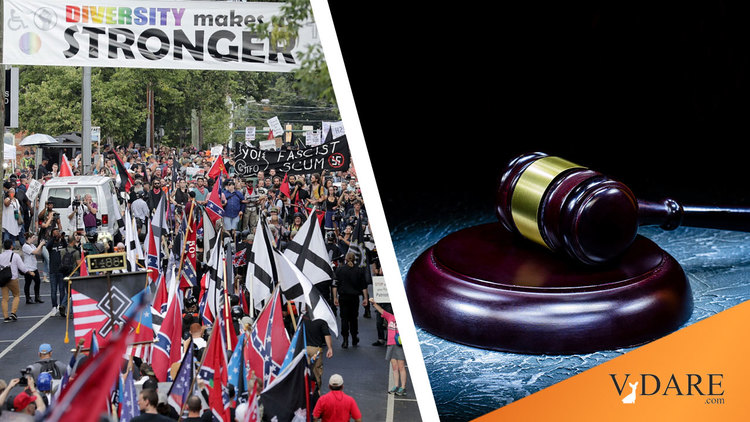 Jason Kessler has a long Twitter thread on the jury deliberations in the Charlottesville Civil Conspiracy Lawfare Suit.

The jury has reconvened in Charlottesville for Day 2 of deliberations in the Sines v Kessler case.

Keep in mind that there will be enormous pressure to reach a verdict before Wednesday so that deliberations don’t effect Thanksgiving plans.

Jury wants to go over transcript of Matt Parrott’s testimony

Parrott’s fanfiction described a League of the South member tearing through counterprotesters like “a tyrannosaurus among raptors” and TWP coordinating with “Identity Europa fighters who relayed information to Jason Kessler”.

Jury has a question about a jury instruction stating that negligence cannot be used as a defense against conspiracy.

The strange thing is that none of the defendants raised this as a defense.

A juror has asked, “Are words a form of violence according to federal law?”

The literal answer to the question is, of course, NO. Words are not a form of violence under US law.

Plaintiffs are of course trying to advocate that the judge does not directly answer the question.

I will remind folks how crucial it is to have an attorney waiting in the courtroom and pushing back on plaintiffs desire to non-answer these types of questions.

Having legal representation there in these critical moments is a direct result of your donations to the legal fund.

Judge Moon referred them to one of the jury instructions outlining that advocacy of violence is 1A protected and queried them on if that answered the question. If not, I think further clarification on First Amendment law will be in order.

Kolenich and Moon discussed how 1A jurisprudence holds that speech is protected unless inciting “imminent lawless action”.

That seems to be what will be clarified if the jury needs additional instruction.

Jury wants to know if they cannot come to a decision on the first three claims if they can consider 4,5 and 6 regardless.

Moon wants them to come to a unanimous decision on all 6 counts.

Sounds like jury is locked on the civil conspiracy counts which are 1-3. Potentially more agreement on 4-6.

4 is non conspiracy dealing with A11. 5 and 6 are James Gields only. #Charlottesville

Moon says that if jury cannot come to an agreement he will issue an Allen Charge instructing the minority group [dissenting jurors, that is, not racial minority.] to rethink their position.

What is an Allen (or "dynamite") charge?

When jurors cannot agree on a verdict and report this to a judge, the judge may issue further instruction to them to encourage those in the minority to reconsider their position.

Seems like a good chance there won't be a verdict today either. This trial is obviously hung and I think Moon should be a little more assertive in steering this towards a mistrial so that everyone can go home for the holidays.

Jury is still deadlocked and Moon excuses them for the day. #Charlottesville