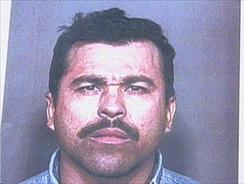 The evil character recently arrested for child rape in Chandler, Arizona, is an illegal alien. Santana Batiz Aceves preyed upon children, raping four girls aged 12 to 15 and attempting to assault two others.

As Chandler residents regroup following a man's arrest in the rapes that terrorized the city for 18 months, immigration advocates are bracing for the angry tide over illegal immigration to wash over the Valley again.

From talk radio to lunch-time talk, Santana Batiz Aceves' status as a Mexican national who was deported twice before his weekend arrest in the "Chandler Rapist" case will be cited by both those who advocate a hard-line stance on immigration and those who are sympathetic to the plight of undocumented immigrants.

Experts agree that as details of the reported series of attacks on young girls emerge, they will harden the public's attitude toward illegal immigrants - especially [Arrest in Chandler Rapist case may fuel debate, Arizona Republic, Jan 14, 2008] because assaults against children are among the worst types of crimes, they say.

The article above doesn't use the term "backlash" (such as, "Hispanic residents fear a backlash because of the crimes"), but that's the real topic in a word.

As I've written before (e.g. Backlash Fears in Virginia Beach), every arrest of a non-American criminal for a horrendous crime elicits a flurry of media interest in a backlash. The idea is that we awful Americans generalize unfairly about every member of the ethnic group of the perp — with the implication that lynch mobs can't be far behind.

But if American citizens notice the genuinely high incidence of crime among illegal aliens — particularly sexual assaults and deaths from drunk driving — what's wrong with that? Public policy should be based on facts, not kumbaya illusions of world peace through erasing borders.

Furthermore, 12 serial sex offenders cross the U.S. border illegally every day, according to a 2006 Department of Homeland Security report. Illegal immigration is not a victimless crime and open borders endanger all citizens. The Chandler rapist is one example out of many.