Cass Sunstein Calls for an Obama on Horseback 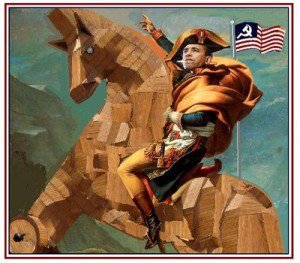 Former Obama Administration official Cass Sunstein is the husband of UN Ambassador Samantha Power and the propounder of such swell ideas as the government should battle conspiracy theorists by mounting secret conspiracies to hire agents provocateur to engage in “cognitive infiltration” of conspiracy theorist websites. In 2013, Sunstein wrote a column in favor of Bowling Alone entitled “Could Bowling Leagues and the PTA Breed Nazis?”

Here’s the abstract of his latest, a timely effort in the wake of the Democrats losing the recent Congressional election:

“Partyism” is a form of hostility and prejudice that operates across political lines. For example, some Republicans have an immediate aversive reaction to Democrats, and some Democrats have the same aversive reaction to Republicans, so much so that they would discriminate against them in hiring or promotion decisions, or in imposing punishment. If elected officials suffer from partyism – perhaps because their constituents do – they will devalue proposals from the opposing party and refuse to enter into agreements with its members, even if their independent assessment, freed from partyism, would be favorably disposed toward those proposals or agreements. In the United States, partyism has been rapidly growing, and it is quite pronounced – in some ways, more so than racism. It also has a series of adverse effects on governance itself, above all by making it difficult to enact desirable legislation and thus disrupting the system of separation of powers.

Under circumstances of severe partyism, relatively broad delegations of authority to the executive branch, and a suitably receptive approach to the Chevron principle, have considerable appeal as ways of allowing significant social problems to be addressed. This conclusion bears on both domestic issues and foreign affairs.

The “Chevron principle” refers to a 1984 Supreme Court decision limiting the judicial branch’s right to limit the power of the executive branch.

It never seems to occur to Sunstein that someday his wife won’t be in the meetings where they decide who to call a drone strike in on. Maybe we’ll soon see a paper from Sunstein called “Electionism” denouncing the divisive, time-wasting, outmoded tradition of holding Presidential elections when the current President is obviously addressing significant social problems with his amnesties and drone strikes.