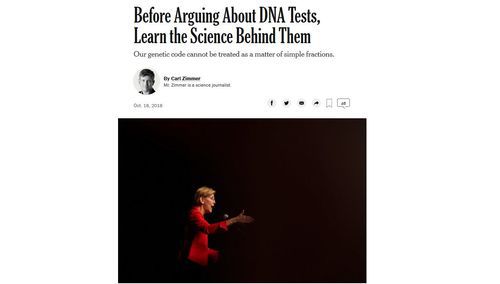 Carl Zimmer: "Before Arguing About DNA Tests, Learn the Science Behind Them"

Before Arguing About DNA Tests, Learn the Science Behind Them
Our genetic code cannot be treated as a matter of simple fractions.

In other words, buy Carl’s book! I reviewed Carl’s She Has Her Mother’s Laugh earlier this year in Taki’s.

… The reception of Senator Elizabeth Warren’s DNA results is a textbook case in this confusion.

On Monday morning, Senator Warren released an analysis on her DNA showing that six to 10 generations back she had a Native American ancestor. Within hours, Michael Ahrens, an official at the Republican National Committee, dismissed the results in a tweet:

By Monday afternoon, James Freeman, an assistant editor of The Wall Street Journal’s editorial page, had fleshed out Mr. Ahrens’s arithmetic. The DNA analysis, he wrote, “suggests that the senator is somewhere between 1/64th and 1/1024th Native American.” He added: “Her genetic makeup is perhaps similar to that of the average white person in the U.S.”

Carl is very mad about these fractions, but will he tell us what he thinks are better estimates?

These numbers then began ricochet around social media. They carried a clear implication: that Elizabeth Warren was no different in her Native American ancestry than a great many other white Americans.

Both Mr. Ahrens and Mr. Freeman cited a 2014 New York Times article as evidence for their claims. I wrote that article. So let me just say this: They’re wrong.

They both mistakenly treat DNA as a matter of simple fractions. We each have two parents, the thinking goes, so therefore we inherit half of each parent’s DNA. From each grandparent we inherit precisely a quarter of our DNA, and so on by the powers of two back into the mists of time. This is how they came up with the 1/1024th figure — two parents, each with two parents, going back 10 generations.

This misguided way of thinking has a history that extends far beyond the discovery of DNA.

Actually, that’s a pretty reasonable way of thinking. Your biological family tree exists in some kind of Platonic realm. Ten generations ago in your family tree, there are 1024 open slots that somebody filled. Your DNA today is massively influenced by who those 1024 were, but it’s not a perfect replication due to the lumpiness of the process.

For centuries, people thought of ancestry in terms of blood, and fractions of it. People were pure-blooded or half-blooded. When the United States government set up rules for deciding who could be members of Native American tribes, it called the system “blood quantum.” …

But DNA is not a liquid that can be divided down into microscopic drops. It’s a string-like molecule, arranged into 23 pairs of chromosomes, that gets passed down through the generations in a counterintuitive way.

It’s not that counterintuitive. It works a lot like people figured. But until recently, people tended to think in analog terms and didn’t have that many examples of digital-like quantum processes to draw analogies from. Darwin and Galton were stumped at working out the details of how heredity works because the model they had in mind was mixing fluids in chemistry, which can go using fractions on for quite some time before 19th Century chemists had to start to worry about the fundamental lumpiness of reality at the molecular and below levels.

… That means we inherit about a quarter of our DNA from each grandparent — but only on average. Any one person may inherit more DNA from one grandparent and less from another.

Over generations, this randomness can lead to something remarkable. Look back far enough in your family tree, and you’ll encounter ancestors from whom you inherit no DNA at all.

The geneticist Graham Coop of the University of California, Davis, and his colleagues have studied how DNA disappears. If you pick one of your ancestors from 10 generations back, the odds are around 50 percent that you carry any DNA from him or her. The odds get even worse beyond that.

In other words, if Senator Warren had a second, wholly independent American Indian ancestor ten generations ago (say from the other parent’s side), there’s a 50% chance Professor Bustamante might never have noticed any DNA from him or her. So, there’s a chance she’s not 1/1024th Indian but 2/2024th Indian! Or something.

Even if you get no DNA from many of your ancestors, they are still your ancestors. “Genetics,” Dr. Coop has noted, “is not genealogy.”

This is like saying that Newton was wrong because of Einstein and Einstein was wrong because of Bohr. Yeah, good point … but the Newtonian glass is still pretty full too. Genetics is the real world approximation of the Platonic reality that is your family tree, and it tends to work pretty well, kind of like Newton’s Inverse Square Law isn’t bad at describing a relativistic universe. …

As I pointed out in my review of Zimmer’s book, he, like most contemporary intellectuals, tends to have trouble with the reality that an awful lot of glasses are part full and part empty simultaneously.

How many European-Americans are like Senator Warren, with a small amount of Native American ancestry? Scientists can’t say for sure. The best clues to date come from a 2014 study carried out by researchers at 23andMe. They looked at the DNA of 160,000 customers who described themselves as being of European, African or Latino ancestry. Across all the European-Americans in the study, the average amount of Native American ancestry was 0.18 percent.

But once again, averages can be deceptive. The researchers found Native American ancestry in only 2.7 percent of their customers, while the vast majority had none at all.

On the other hand, Senator Warren is from Oklahoma, where the Bayesian odds are somewhat higher than in, say New Jersey.

In summary, the best guess is that Senator Warren’s ancestry is 1/64th to 1/1024th American Indian, just like the WSJ writer figured.

There is a statistical chance that she might have more … or she might have less. But Prof. Bustamante’s findings suggest that 1/256th is the single likeliest figure.