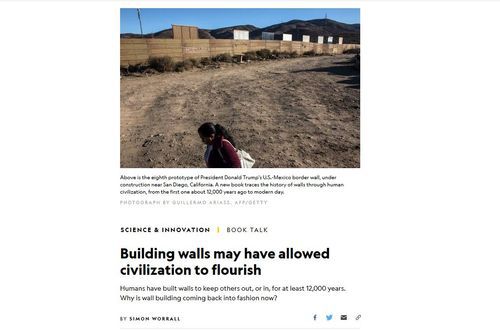 In Defense Of Walls

Building walls may have allowed civilization to flourish

Humans have built walls to keep others out, or in, for at least 12,000 years. Why is wall building coming back into fashion now?

If it is ever built, President Donald Trump’s much-vaunted wall, which is supposed to stretch for nearly 2,000 miles along the United States’s border with Mexico, would be the largest infrastructure project since the U.S. highway system, estimated to cost $18 to $40 billion. But as David Frye reveals in his new book, Walls: A History of Civilization in Blood and Brick, the idea of constructing barriers to keep others out—or, in the case of the Berlin Wall, to keep people in—is as ancient as human civilization. Only the people being shut out have changed.

When National Geographic caught up with Frye by phone at his home in Connecticut, he explained how the ancient world was split between wallers and non-wallers, how the Berlin Wall set a precedent by being the first wall to keep people in, and why America and so many other nations are “forting up.”

Q. President Trump gave the idea of excluding outsiders with walls a contemporary twist when he vowed to build a “big, beautiful wall.” But he is latching onto something ancient, isn’t he?

A. It is an ancient idea. People have been building walls since the tenth millennium B.C. The ancient walls were built primarily for defensive purposes. Nowadays, they are built more to prevent immigration, terrorism, or the flow of illegal drugs. But there is a common connection, which is the idea of keeping outsiders out. …

The first border walls aren’t found until the late 2000s B.C., in Mesopotamia. Security is why they were built. There were two different lifestyles developing: a lifestyle of the people I call wallers, who are workers who build things and identify themselves by their civilian occupations. They sought to secure themselves by building structures that would protect them even when they were sleeping at night. Outside the walls, you have a very different sort of society, people inured to the dangers of living in an un-walled world. Non-wallers were peoples we generally refer to historically as barbarians, like the Huns, the Goths, or the Mongols. They were viewed with fear by the wall-builders. And that’s what inspired the construction of the early walls.

Q. You write, “No invention in human history played a greater role (than walls) in creating and shaping civilization.” Some people might vote for writing or gunpowder. Make your case.

A. I would make the case that there would be no writing and nothing as complex as gunpowder without first the construction of walls. The ancient human need for security is one of the fundamentals of life and has to be achieved before we can achieve other things. It was walls that gave people the security to sit and think. It’s hard to imagine a novel being written in a world in which every man is a warrior. Until a society achieves security, it can’t think about anything except the dangers all around it. As a consequence its culture will be limited.