Camp Of The Saints In The Canaries

Via Brenda Walker's blog at Lmitstogrowth.org, I see that Daniel Pipes has an article in the New York Sun on the world wide immigration crisis.

Ever resourceful, migrants repaired farther south, now to Senegal. The Canaries run takes less than a day from Morocco but three days from Mauritania and seven to 10 days from Senegal. Notoriously rough seas off West Africa can easily overwhelm the open wooden fishing boats and their single outboard engines as they cover the 900 miles.

The Spanish ambassador-at-large for humanitarian issues, Manuel Pombo, has reported that up to 40% of those attempting to reach the Canaries die en route. The head of the Red Crescent in Mauritania, Ahmedou Ould Haye, has called it "collective suicide." Another observer sadly predicted, "Three months or so later, some of these sorry vessels may creep into the Caribbean – as ghost ships, or worse."[New Route to the West, May 30, 2006] 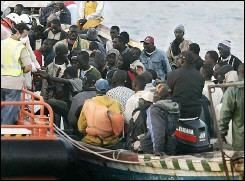 Of course, this is exactly what Jean Raspail predicted in Camp of the Saints

, and the question continues to be: will the West fight back? In the Canary Islands, the answer is no. Pipes reports that "the waves of immigration keep growing, in large part because once they land on Spanish territory, their reception is so accommodating and few illegals are ever deported."

That's a story that Americans are becoming more and more familiar with.