In Democrat-run Mexifornia, Governor Jerry Brown is on a roll to shred law enforcement’s ability to protect public safety. After enacting driver’s licenses for illegal aliens a few days ago, he finalized the so-called TRUST Act ending the partnership, known as Secure Communities, in which local police hand over already arrested foreign lawbreakers to the feds.

Liberal advocates for touchy-feely policing claim that illegal immigrants are too shy about their status to report crimes and therefore the foreign invaders should be cut more slack regarding their lawbreaking behaviors, kindly treatment that mere citizens don’t get. Soft enforcement on foreign criminals is a major price we Americans pay for the questionable addition of diversity into our society.

However a September paper from the Center for Immigration Studies (Immigration Enforcement and Community Policing) demonstrates that the “chilling effect” from police cooperation with ICE is a fiction. For example, Hispanics are more likely than other groups overall to report crimes, according to Justice Department figures. Local studies are examined in the CIS piece and show similar attitudes toward police among foreigners.

And whatever happened to the idea of “broken windows” policing? The idea was to grab beginning criminals doing minor crimes before they grew into dangerous felons. The new TRUST law turns that policy on its head by instead protecting lesser criminals. 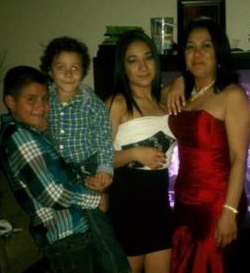 The San Jose Mercury News noted a local murder case that showed the flaws of the squishy liberal view. (The crime victim, Martha Casillas, is pictured at right with her three children, back when she was alive.)

SAN JOSE — A month before authorities say he killed his wife, 40-year-old Mario Chavez was in jail after a heated domestic argument that ended with him threatening their 6-year-old son with a knife.

His family got a protective order. He made bail. When a judge later raised the amount, so did Chavez.

In the weeks since the Sept. 7 slaying that left three San Jose children virtually orphaned, some of the sadness gave way to a pointed question: Should Chavez — who was in the country illegally — have been able to post bail in the first place?

Immigration and Customs Enforcement officials contend they could have kept Chavez off the street, but were stymied by a county policy that severely curtails their access to inmates. But the local leaders who championed that policy say it remains an important protection against federal overreaching, and argue the criminal justice system has plenty of other ways to keep dangerous individuals locked up.

It’s likely that fellow Hispanics will be the most frequent crime victims resulting from weakened law enforcement, simply because the illegals swim in the ocean of the Spanish-speaking community.

Of course, life will become more dangerous for all California residents because the state welcome mat is now firmly in place for diverse criminals.

Reversing his position from a year ago, Gov. Jerry Brown on Saturday signed a law that shields illegal immigrants arrested on suspicion of many crimes from being turning over to immigration authorities.

Coming on the heels of Brown signing a bill allowing illegal immigrants to obtain driver’s licenses, Brown’s signature on the so-called Trust Act signaled a personal turnaround. It also highlighted the dramatic shift in Californians’ views toward illegal immigration since voters in 1994 overwhelming approved Proposition 187, which barred illegal immigrants from receiving public benefits but was ultimately overturned in court.

Brown said that AB4 by Tom Ammiano, D-San Francisco, “protects public safety and yet also protects immigrants who are basically living upright lives and working hard for the people.”

The bill prohibits placing U.S. Immigration and Customs Enforcement holds on jail inmates who are otherwise eligible for release. Brown said he now felt comfortable signing the bill because the Legislature had added several provisions to the Trust Act since he vetoed it last year that will allow those charged or convicted with serious and violent felonies to be held for ICE agents. Crimes added to the list that expose immigrants to deportation include child abuse, gang-related crimes, drug trafficking, weapon sales, using children to sell drugs and aggravated federal felonies.

The bill extends statewide what Santa Clara County and some other jurisdictions around the country have already put into practice, sometimes raising controversy when immigrants who might have been deported are later arrested on suspicion of committing serious crimes.

Law enforcement agencies, which opposed the bill, and immigrant advocates both had energetically lobbied Brown on Ammiano’s bill.

Part of it is simply a recognition of numbers. “It’s hard to imagine elected officials not recognizing that Latinos are becoming the largest single group in the state,” Gerston said.

“Opposition to illegal immigration isn’t as ardent as it was even a few years ago,” said Jack Pitney, a politics and government professor at Claremont McKenna College. He said that’s true not only in California, but also nationwide.

Still, critics of illegal immigration blasted Brown and the Legislature.

They are placing politics before public safety, said Kristin Williamson of the Federation for American Immigration Reform, a group that tries to reduce both legal and illegal immigration.

“Californians, regardless of their immigration status, are now left unprotected from deportable criminal aliens, and ICE agents will be forced into unnecessarily dangerous situations trying to track down illegal aliens who were already safely in the custody of state and local law enforcement,” she said.

In San Jose, as word of Brown’s signature Saturday morning spread through an immigration-reform rally, march organizer Lucila Ortiz said the move was precisely the sort of legislation that the nation’s immigrants are longing for.

“We think this will actually improve public safety because until now so many in the immigrant community have been afraid to call police because they fear they’ll be pulled into deportation,” Ortiz said.

“If you’re stopped by police for a minor infraction,” Morieko said, “you shouldn’t have to also worry that it will lead to you being deported.”

The Trust Act has its genesis in the 2008 Secure Communities program, a federal-state partnership Brown signed when he was California’s attorney general. Under it, the FBI shares a suspect’s fingerprints with ICE, which may ask for an immigration hold. The program had led to tens of thousands of deportations in California.

Now that cooperation will be limited.

Immigration holds became a focus with the arrest of Mario Chavez on suspicion of killing his wife on Sept. 7 in San Jose. A month earlier, Chavez, who is in the country illegally, had been arrested and released by jailers in Santa Clara County after allegedly threatening his 6-year-old son with a knife.

ICE officials said they would have kept Chavez behind bars after the threat. Instead, he posted $8,000 in bail, ignored a protective order and allegedly stabbed his wife to death.

How the law affects public safety may influence whether similar legislation is enacted in other parts of the country.

“California is undertaking a notable experiment,” Pitney said. “We’ll have to see how it works.”