Today was the primary election in California, and we voters in Alameda County had even more diversity to bear, er celebrate.

I snapped the photo below at my local polling station, which shows two new languages added to ballots by federal law, Vietnamese and Tagalog, even though immigrants are supposed to understand and speak English to become naturalized citizens. I could have gotten an “I Voted” sticker in any of four languages, and chose English. 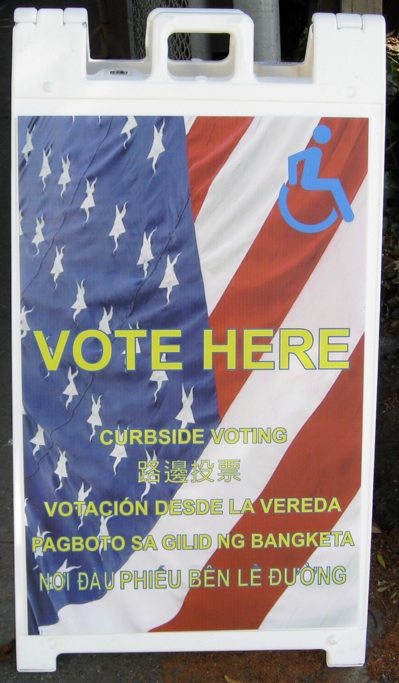 Federal monitors will be watching the polls in Alameda County tomorrow to make sure multilingual voters get the help they need. That includes having ballots in four languages and enough bilingual poll workers to comply with the Voting Rights Act.

Alameda’s registrar of voters Dave Macdonald says it’s difficult to find poll workers, bilingual or not: “it’s a long day you work from 6 in the morning until maybe 9 or 10 o’clock at night. It’s a very stressful job, but it’s also very rewarding.”

Alameda County will now offer language support in Vietnamese and Tagalog, in addition to Spanish and Chinese.

Federal poll monitors will also be on watch in Fresno and Riverside Counties.

It was not an election that inspired much voter enthusiasm, what with the Presidential primaries already decided.

However I did enjoy casting a vote for Republican Senate candidate Nachum Shifren, the surfing rabbi who kicks sharia down the stairs whenever he gets the chance.

Not that he or any other Republican has a chance against incumbent Dianne Feinstein, who remains a popular political figure for some odd reason.