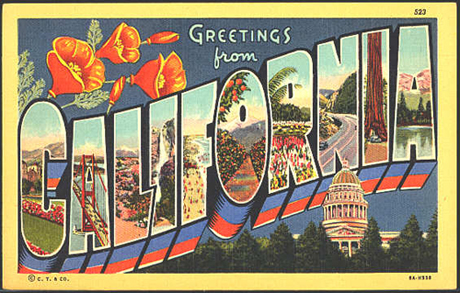 In Mexifornia, the budget’s red ink totes up at around $25 billion, but there is always money to be found to service its millions of illegal aliens, because Democrat priorities are clear.

And a familiar evil-doer is heading up the pack: the infamous ”One-Bill Gil” Cedillo. The nickname refers to his obsession with getting California to give driver’s licenses to illegal aliens, thereby endangering public safety on the highways and providing identification for any terrorists that might want it.

This time, Cedillo is sponsoring the bills that supply financial aid in a state-level DREAM Act to illegal alien students, so they can attend college and take slots that should go to American citizens. Gubernatorial candidate Jerry Brown promised to support increased benefits for illegal alien college students, so passage into law looks to be a lead-pipe cinch.

California higher education is getting less local- and American-friendly all the time, as was recently reported (University of California sees applications surge). The state university system is admitting more foreign and out-of-state students because they pay higher tuition. But the university elite want more illegal alien students (who already receive taxpayer-subsidized in-state tuition), so citizens are displaced.

The whole project is gigantic money pit, since illegal alien college graduates are still ineligible work legally. How stupid and corrupt can a government program be?

A bill that would give students who are in the country illegally the opportunity to access college financial aid was introduced in the state Legislature this week, according to news reports.

The California Dream Act, AB 130, would allow students who are in the country illegally to benefit from the same financial aid as other students in the state who attend public universities and colleges, according to a San Jose Mercury News story.

This bill is different than an earlier failed federal bill, which would have given some students in the country illegally a pathway to legal residency and eventually U.S. citizenship.

Supporters of the state bill said it will help students gain an education and eventually contribute to the workforce. Opponents say the already-strained state can’t afford to help those who are in the country illegally.

A previous version of the bill passed the state Senate and Assembly in the past but Gov. Arnold Schwarzenegger vetoed it three times.

Assemblyman Gil Cedillo, D-Los Angeles, who reintroduced the bill Tuesday is hoping newly elected Gov. Jerry Brown will be more receptive to the bill, according to a Sacramento Bee story.

The fiscal impact of Cedillo’s current bill is undetermined at this time but a previous version of a bill in 2010 would have resulted in more than $38 million in new annual expenditures from the Cal Grant program, according a calculation by the California Student Aid Commission.

Yenni Diaz, a spokeswoman for the Orange County DREAM team, said while the federal DREAM Act failed the bill would make the situation easier for students who are having a hard time paying for a higher education.

”It’s just going to open doors for students,” Diaz said. ”These students are already paying into it with tuition. They would just have access to it. This is a small step to making their life better.”

The bill would apply to students in the country illegally who have attended California high schools, adult schools or technical schools for three years or more. The applicant would also have to have attained an equivalent degree from one of those schools and filed an application for legal residency.

The bill comes at a time when Brown has introduced billions of dollars in proposed cuts in the state budget, including to the public university systems.

Anti-illegal immigration activists say the bill rewards illegal behavior and ends up hurting American and legal resident students who would then have to compete with students who are in the country illegally for financial aid.

”I’m sorry but the education for these people who were brought into the United States illegally is the responsibility of the parents,” said Barbara Coe, who heads Huntington Beach-based California Coalition for Immigration Reform. ”We cannot be expected to sacrifice the education of loyal, law-abiding Americans in order to accommodate the demands of law lawbreakers. It’s that simple.”

Diaz said students in the country illegally wouldn’t be taking resources from other students.

”These students are already going to school and paying tuition,” she said. ”A portion of that goes to scholarships and right now the undocumented are not able to tap into these resources.”

Both Diaz and Coe said they are reaching out to fellow activists via Facebook, faxes, e-mails and phone calls.