Over at Buzzfeed, Joseph Bernstein  [Email him] has written an interminable expose based on internal emails he has obtained (leaked by someone) about Breitbart and a famous Milo Yiannopoulos article called An Establishment Conservative's Guide To The Alt-Right  [March 16, 2016] which explained what was going on outside the Politically Correct confines of Conservatism, Inc.

It describes the editorial process that led to publishing it, with drafts being mailed back and forth to sources for comment, and it also discloses the internal reservations of Breitbart editor Alex Marlow [Tweet him]

Over the next three days, Yiannopoulos passed the article back to Yarvin and the white nationalist Saucier, the latter of whom gave line-by-line annotations. He also sent it to Vox Day, a writer who was expelled from the board of the Science Fiction and Fantasy Writers of America for calling a black writer an “ignorant savage,” and to Alex Marlow, the editor of Breitbart.

I interrupt this quote to say that this passage I’ve bolded is typical in that it contains no links or citations—such as you always see here at VDARE.com—and contains a misquote.

SF writer Vox Day had replied on his blog to a black female writer who, after various blood libels directed at whites, referred to Vox Day himself as a “self-described misogynist, racist, anti-Semite, and a few other flavors of asshole”. Day protested that he certainly didn’t describe himself that way, but was described so by various enemies, and said of the woman libeling him that

“Being an educated, but ignorant half-savage, with little more understanding of what it took to build a new literature by "a bunch of beardy old middle-class middle-American guys" than an illiterate Igbotu tribesman has of how to build a jet engine, Jemisin clearly does not understand that her dishonest call for "reconciliation" and even more diversity within SF/F is tantamount to a call for its decline into irrelevance.”

This is clearly strong stuff (and SFWA did expel him). But it doesn’t contain the quoted phrase “ignorant savage”.

There’s a lot of stuff like this in article—a tapestry of new private information spun to make Milo and Breitbart look evil, but tacked on to all the old errors and lies. VDARE.com makes a cameo appearance:

Five days later, March 22nd, Marlow returned [Milo's draft article] with comments. He suggested that the story should show in more detail how Yiannopoulos and most of the alt-right rejected the actual neo-Nazis in the movement. And he added that Taki's Magazine and VDare, two publications Yiannopoulos and Bokhari identified as part of the alt-right, “are both racist. … We should disclaimer that or strike that part of the history from the article.” (The published story added, in the passive voice, “All of these websites have been accused of racism.”)

Here's How Breitbart And Milo Smuggled Nazi and White Nationalist Ideas Into The Mainstream | A cache of documents obtained by BuzzFeed News reveals the truth about Steve Bannon’s alt-right “killing machine.” By Joseph Bernstein, October 5, 2017

What this really shows is that Breitbart editor Alex Marlow [Email him] has the Conservatism, Inc, fainting couch sensibilities of a Rich Lowry.

He's also, apparently, the guy who fired Katie McHugh for saying this: 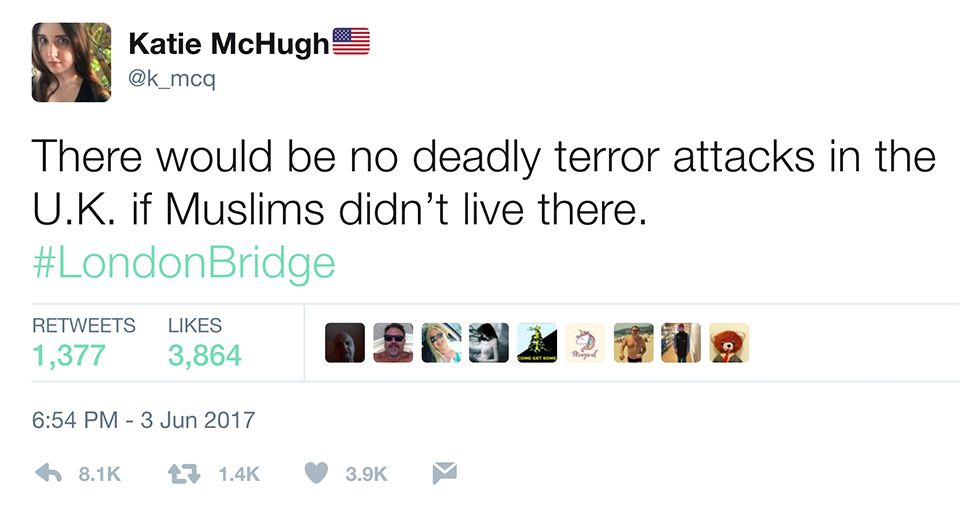 Breitbart is doing what James Kirkpatrick described here in  Derbyshire, Weissberg, And Dog-Whistling: Conservatism Inc's Uneasy Balancing Act—trying to get a nationalist, patriotic readership without paying the price in MSM respectability.

Apparently Alex Marlow is the reason that Breitbart goes squishy when Bannon takes his eyes off it. He should either get with the program, or quit and work for National Review.