In non-liberal locales, public safety is understood as the #1 job of government. But in California, the top official would rather insult President Trump than protect the citizens from lawbreaking illegal aliens.

The San Jose Mercury News front-pager on Oct 6 didn’t even pretend that the sanctuary scam was enacted to protect the supposedly long-suffering illegal aliens — no, the “‘Sanctuary state’ law defies president.” It’s all about liberal Mexifornians saying Screw You to President Trump. 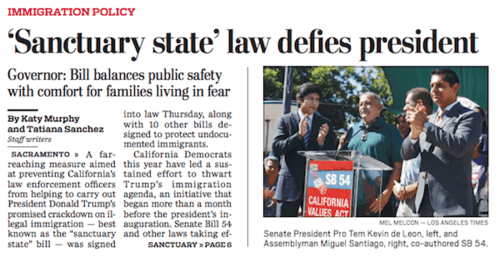 It’s not like California has been free of illegal alien crime — just the opposite, but state residents killed by illegal aliens are ignored in Democrat-run Sacramento. They include Kate Steinle in San Francisco, the three members of the Bologna family in San Francisco, Marilyn Pharis of Santa Maria, Drew Rosenberg from Los Angeles, Jamiel Shaw in Los Angeles and film director Bob Clark of Pacific Palisades.

Los Angeles radio stars John and Ken hope that the Trump administration will double down on arresting California illegal punks.

The bills will help “hard-working people who contribute to our state,” Brown said.

SACRAMENTO — A far-reaching measure aimed at preventing California’s law enforcement officers from helping to carry out President Donald Trump’s promised crackdown on illegal immigration — best known as the “sanctuary state” bill — was signed into law Thursday, along with 10 other bills designed to protect undocumented immigrants.

California Democrats this year have led a sustained effort to thwart Trump’s immigration agenda, an initiative that began more than a month before the president’s inauguration. Senate Bill 54 and other laws taking effect in January are widely seen — by champions and foes — as the most extensive statewide protections anywhere in the nation for those fearing deportation.

“These are uncertain times for undocumented Californians and their families,” Gov. Jerry Brown wrote in his signing statement for SB 54 Thursday, “and this bill strikes a balance that will protect public safety while bringing a measure of comfort to those families who are now living in fear every day.”

SB 54 was the centerpiece of California’s anti-Trump resistance on immigration issues. Introduced on the first day of the legislative session last December and passed in the session’s final hours, it was pushed by immigration and civil rights groups but fiercely fought by the powerful statewide sheriff’s association.

The bill’s signing came as a big relief to Yadira Sanchez, 26, an undocumented immigrant from Mexico who lives in Oakland and works with the California Immigrant Youth Justice Alliance. Brown’s decision, she said, reaffirms California’s position as a leader in defending immigrant rights.

“We’ve always been one of the few states that sends this message to the rest of the country that it is possible to win local victories and that those victories are very important, regardless of what is going on at a national level or in the federal government,” she said.

The bill will limit communication between California police officers and federal immigration agents about people detained by police or in jail awaiting trial. Exceptions include those who have been convicted of at least one of hundreds of serious crimes within the past 15 years and suspects in serious crimes punishable with prison time for which a judge has found probable cause. It also prohibits California officers from inquiring about a person’s immigration status.