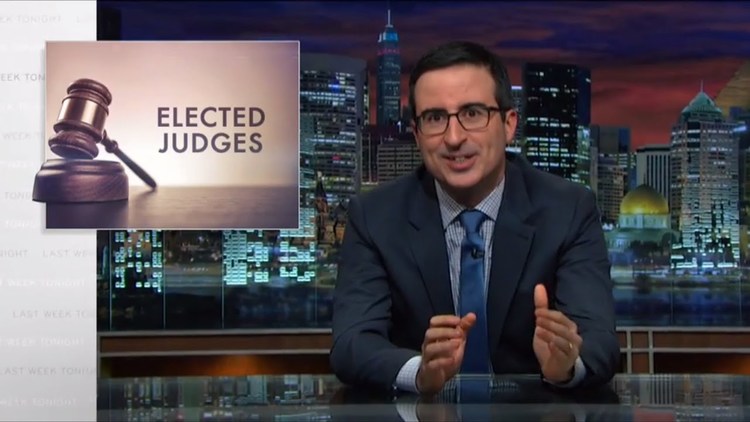 John Oliver is a British comedian, who, like his American counterparts Jon Stewart and Stephen Colbert , sees his primary role as defending the established order.  [The Court's Jesters, by Gregory Hood, Radix Journal, November 14, 2014]  In his most recent show, he was triggered by Justice Roy Moore of Alabama, who defied a federal court ruling ordering Alabama to recognize gay marriages.  This prompted the usual SWPL whine about uncouth Americans using things like banjos and tough talk against criminals to get elected judge.

The problem of course is that the credentialism Oliver suggests as an alternative is even more meaningless.   As Mark Steyn notes,

What happened in between? Jurisprudentially, nothing: Everything Chief Justice Warren Burger said back in the ’80s — about Common Law, Blackstone’s “crime against nature,” “the legislative authority of the State” — still applies. Except it doesn’t. Because the culture — from school guidance counselors to sitcom characters to Oscar hosts — moved on, and so even America’s Regency of Jurists was obliged to get with the beat.

[Why the real battle for America is over culture, not elections, by Mark Steyn, New York Post, October 19, 2014]

The great cornerstones of liberal judicial activism, from Roe v. Wade to Brown v. Board of Ed, were utterly laughable on judicial grounds, as even many liberals admit.  They were simply rulings by a liberal court that had a policy endgame in mind and simply mandated it.  And this will only increase as high judicial appointments will be conferred not because candidates did something gross like get elected, but because they are the right sex or race on a diversity checklist.

Slate, as it often does, worshipfully reposted Oliver's sermon to his liberal choir.  However, it also posted an article by one Ian Millhiser which defended FDR's "Court Packing" scheme.  Millhiser says an independent judiciary is fine when judges can do things like prevent "discrimination."  However, if they are holding to an outdated conception of the law that is getting in the way of implementing liberal programs, judges should be discarded.  As he puts it,

So, when Roosevelt announced his court-packing plan, he wasn't confronted with a choice between a judiciary that was committed to upholding the Constitution and one that would simply provide a rubber stamp for the New Deal. He choose [sic] between a nation subject to the arbitrary desires of five unelected men in robes and a nation governed by men and women elected by the people. Given two distasteful options, he picked the lesser evil.

The same people frantically applauding Oliver's call to stop electing judges are also nodding in approval as they read Millhiser's attack on the "arbitrary desires of five unelected men in robes."  Because contemporary liberalism isn't about logic, or even policy proposals.  It's just social signaling.  The rule of law stopped mattering a long time ago.