Race Is Just a Social Construct, Except ...When DNA Solves Crimes

There were no known eyewitnesses to the murder of a young woman and her 3-year-old daughter four years ago. No security cameras caught a figure coming or going.

Nonetheless, the police in Columbia, S.C., last month released a sketch of a possible suspect. Rather than an artist’s rendering based on witness descriptions, the face was generated by a computer relying solely on DNA found at the scene of the crime.

It may be the first time a suspect’s face has been put before the public in this way, but it will not be the last. Investigators are increasingly able to determine the physical characteristics of crime suspects from the DNA they leave behind, providing what could become a powerful new tool for law enforcement.

Already genetic sleuths can determine a suspect’s eye and hair color fairly accurately. It is also possible, or might soon be, to predict skin color, freckling, baldness, hair curliness, tooth shape and age.

Computers may eventually be able to match faces generated from DNA to those in a database of mug shots. Even if it does not immediately find the culprit, the genetic witness, so to speak, can be useful, researchers say. 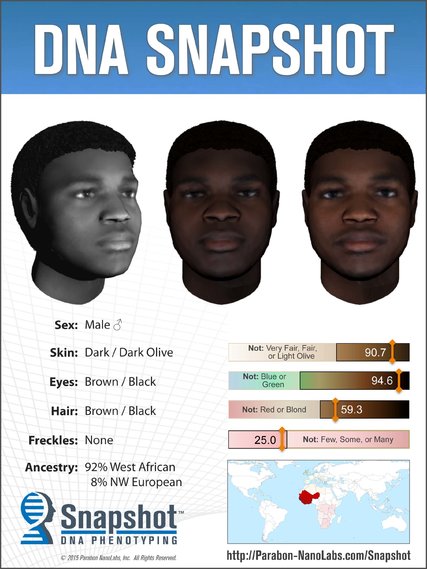 “That at least narrows down the suspects,” said Susan Walsh, an assistant professor of biology at Indiana University-Purdue University Indianapolis who recently won a $1.1 million grant from the Department of Justice to develop such tools.

But forensic DNA phenotyping, as it is called, is also raising concerns. Some scientists question the accuracy of the technology, especially its ability to recreate facial images. Others say use of these techniques could exacerbate racial profiling among law enforcement agencies and infringe on privacy.

“This is another of these areas where the technology is ahead of the popular debate and discussion,” said Erin Murphy, a professor of law at New York University.

DNA, of course, has been used for more than two decades to hunt for suspects or to convict or exonerate people. But until now, that meant matching a suspect’s DNA to that found at the crime scene, or trying to find a match in a government database.

DNA phenotyping is different: an attempt to determine physical traits from genetic material left at the scene when no match is found in the conventional way. …

Gender has long been ascertained from crime scene DNA. About 15 years ago, some police departments began trying to determine the geographic ancestry of suspects, as well, by using tests like the ones consumers order to learn about their genetic heritage.

In 2003, such information helped redirect the search for a serial killer in Louisiana. Police had been looking for a white man based on a witness account and on psychological profiles.

But DNA found at the site of one of the murders indicated the person’s ancestry was 85 percent sub-Saharan African. Eventually, a black man was convicted of the crimes.

Now researchers are closing in on specific physical traits, like eye and hair color.