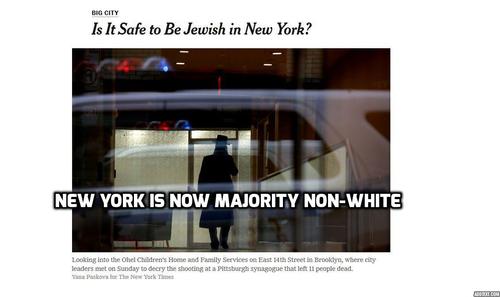 NYT: In NYC, Not a Single Anti-Semitic Hate Crime Is Known to Have Been Committed by a Rightist Since Trump's Election

There have of course been horrible anti-Semitic crimes committed in this vast country by white male rightists, such as the recent Pittsburgh murders and in 2014 an attack on a Jewish center in the Midwest that wound up murdering several gentile visitors.

But, what about in well-documented New York City? From the New York Times:

Is It Safe to Be Jewish in New York?

Just past midnight on May 1, a young rabbinical student was walking home on Eastern Parkway in Brooklyn when he thought he was being followed. A moment after that intuition struck, two men grabbed him, threw him against a car and started punching him.

The victim had dropped a box containing $200, meant for charity, but the money went untouched. The student, it seemed, was attacked because he was overheard speaking Hebrew on his cellphone. His two assailants were indicted on assault and hate crime charges.

No other American city is more closely associated with Jewish identity than New York or more adamantly imagines itself as the capital of liberalism’s most cherished values of tolerance, acceptance and diversity.

And yet, at the same time, New York has become an increasingly unsettling place to be Jewish. The first inkling of this emerged several days after the 2016 presidential election when swastikas and the phrase “Go Trump” showed up on playground equipment in Adam Yauch Park in Brooklyn Heights.

And how can we forget the swastikas found scrawled behind the locked doors of the women’s dorm at the New School for Social Research in Greenwich Village that Matthew Yglesias assumed was just part of the pro-Trump mobs attacking Jews in the street that he had predicted Trump’s election would bring? It was never clear to Yglesias’s readers whether the pro-Trump Nazis were embedded all along in the women’s dorm of the New School or whether the Trump Nazis had infiltrated past its security systems. But one thing, you can be sure, it couldn’t have been a Hate Hoax, because those aren’t a Thing.

But, in fact, anti-Semitism was already quietly on the rise. For several years now, expressions of anti-Jewish sentiment have made up the preponderance of hate crime complaints in the city.

Contrary to what are surely the prevailing assumptions, anti-Semitic incidents have constituted half of all hate crimes in New York this year, according to the Police Department. To put that figure in context, there have been four times as many crimes motivated by bias against Jews — 142 in all — as there have against blacks. Hate crimes against Jews have outnumbered hate crimes targeted at transgender people by a factor of 20.

Within the course of a few days this month, a swastika showed up on an Upper West Side corner and two ultra-Orthodox men were attacked on the street in Hasidic neighborhoods in Brooklyn in separate incidents. In one of them, according to the police and prosecutors, a Muslim livery driver jumped out of a car and started beating up his victim, seemingly at random, yelling “Allah.” (Just this week, more swastikas appeared in advance of Halloween on Garden Place, a popular trick-or-treating spot in Brooklyn Heights.)

But the killjoys at the well-funded New York Police Department ask basic cop questions and then keep careful statistics on what they find out:

If anti-Semitism bypasses consideration as a serious problem in New York, it is to some extent because it refuses to conform to an easy narrative with a single ideological enemy. During the past 22 months, not one person caught or identified as the aggressor in an anti-Semitic hate crime has been associated with a far right-wing group, Mark Molinari, commanding officer of the police department’s Hate Crimes Task Force, told me.

Of course, not everyone is caught. And, obviously, white supremacists are driving anti-Semitic rhetoric online. It is just that sort of hate speech that the Anti-Defamation League views as largely responsible for the near doubling in bias incidents toward Jewish children in schools across the country last year.

In fact, it is the varied backgrounds of people who commit hate crimes in the city that make combating and talking about anti-Semitism in New York much harder.

A related issue is that bias stemming from longstanding ethnic tensions in the city presents complexities that many liberals have chosen simply to ignore. “When we were growing up in Harlem our demoralizing series of landlords were Jewish, and we hated them.” So begins an essay by James Baldwin that appeared in The New York Times in 1967 titled “Negroes Are Anti-Semitic Because They’re Anti-White.”

Of course, things are completely different on the landlord-tenant front in NYC these days!

When a Hasidic man or woman is attacked by anyone in New York City, mainstream progressive advocacy groups do not typically send out emails calling for concern and fellowship and candlelight vigils in Union Square, as they often do when individuals are harmed in New York because of their race or ethnicity or how they identify in terms of gender or sexual orientation.

In other words, it’s quite possible that the majority of anti-Semitic violence in New York City since Trump’s election has been committed against … Trump supporters! The Forward reported: “Orthodox and Russian Jewish neighborhoods in New York City came out strong for Donald Trump on Tuesday. … Nearly every election district that Trump won in Brooklyn was in a Jewish neighborhood.” The NYT continues:

Sympathies are distributed unevenly. Few are extended toward religious fundamentalists, of any kind, who reach the radar of the urbane, “Pod Save America” class only when stories appear confirming existing impressions of backwardness — the hordes of children delivered into the world whom families refuse to vaccinate and keep semiliterate.

The Anti-Defamation League maintains its own statistics and last year it reported that nine of the 12 physical assaults against Jews categorized as hate crimes in New York State were committed in Brooklyn and involved victims who were easily marked as members of traditionally Orthodox communities. Outside that world they were hardly noticed at all.

You might think that Brooklyn Heights schools could afford better reading programs to quell the ever rising numbers of Nazi dyslexics? Or maybe these aren’t supposed to be swastikas at all, they could be the turf markings of an ancient Aztec cactus-worshipping cult?