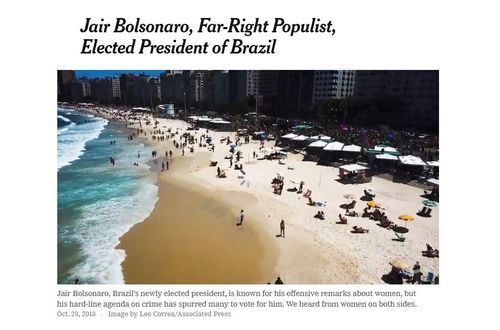 Since most of the blame for America’s current troubles are conventionally laid at the feet of whiteness, it is widely assumed that the cure for Trumpism’s appeal at the polls is less whiteness.

Brazil is much further along the road to genetically diversifying whiteness, and yet, the politics of diversity aren’t quite working out as assumed. … From the NYT:

RIO DE JANEIRO — Brazil on Sunday became the latest country to drift toward the far right, electing a strident populist as president in the nation’s most radical political change since democracy was restored more than 30 years ago.

One reason Bolsonaro won fairly easily is because he dramatically survived being stabbed by a political opponent a few months ago on the campaign trail. But the NYT doesn’t get around to mentioning this fact that’s not congruent with The Narrative until the 33rd paragraph of the article:

Mr. Bolsonaro’s presidential ambition nearly ended on Sept. 6 when a man sliced a knife into his stomach during a campaign rally, slashing several organs and his intestines.

After that, Mr. Bolsonaro declined to participate in debates and did few probing interviews, leaving significant gaps in the electorate’s understanding of his position on pivotal issues, including pension reform and the privatization of state enterprises.

In the wake of the attack, Mr. Bolsonaro’s standing in the polls rose steadily after languishing in the low 20-percent range for weeks.

You might think that the stabbing would be seen as an important key to explaining Bolsonaro’s election, but bringing it up undermines The Narrative of political violence in the Current Year being exclusively right wing. So, best to drop it deep in the details long after most subscribers have stopped reading.