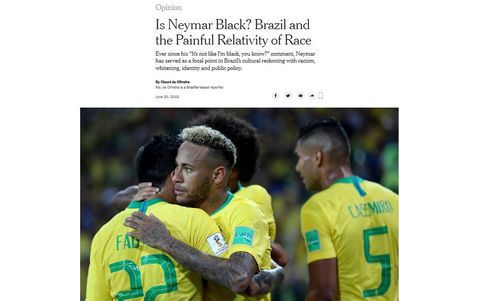 "Is Neymar Black? Brazil and the Painful Relativity of Race"

Is Neymar Black? Brazil and the Painful Relativity of Race

Ever since his “It’s not like I’m black, you know?” comment, Neymar has served as a focal point in the country’s cultural reckoning with racism, whitening, identity and public policy.

Cleuci de Oliveira (@Cleucl) is a journalist who has reported both in the United States and South America. Her work on race and Brazilian law has appeared in Foreign Policy, The Guardian, and other outlets.

Years before he became the most expensive player in the world; before his Olympic gold medal; before the Eiffel Tower lit up with his name to greet his professional move from Barcelona to Paris, Neymar da Silva Santos Júnior, the Brazilian forward known to the world simply as Neymar, faced his first public relations controversy.

The year was 2010, and Neymar, then 18, had shot to fame in Brazil after a sensational breakout season. During an interview for the newspaper O Estado de S. Paulo, in between a conversation about Disneyland and sports cars, he was asked if he had ever experienced racism. “Never. Not in the field, nor outside of it,” he replied. 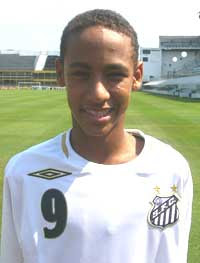 His answer was heard like a record-scratch across the country. Was this young man in denial about his racial identity? Particularly when in the same interview he outlined his meticulous hair care regime, which involved getting his locks chemically straightened every few weeks, then bleached blonde.

No, it’s just that Latin America’s one-drop rule works in the opposite direction. You are only black black if you have no obvious white ancestry at all.

By the way, in the U.S., female celebrities who are considered black, such as Beyonce, spend fortunes to make their hair and/or skin look whiter. But to Americans, for a Latin American male celebrity like Neymar or Sammy Sosa to follow the Beyonce path with his grooming regimen seems a little … gay. (Presumably, we will eventually be harangued over how criticism of Neymar and Sosa is homophobic, but the NYT hasn’t gotten around to that level of wokeness quite yet. But I present that suggestion as a topic for your essay in The Atlantic or Salon: accuse the NYT of homophobia for not worshipping Neymar’s identity claim.)

Or was there a less alarming explanation behind his comment? Could Neymar merely be pointing out that, as the son of a black father and a white mother, his lighter skin tone shielded him from the racist abuse directed at other players? Had he, at least in his context, reached whiteness? Whatever the interpretation, Neymar’s words revealed the tricky, often contradictory ways that many Brazilians talk, and fail to talk, about race in a country with the largest population of black descendants outside of Africa.

In contrast, the new Democratic candidate for governor of Maryland, Ben Jealous, is a Golf-American who grew up on the Monterey Peninsula down the road from Pebble Beach. But he is still the former head of the NAACP and the first black something something something.

When audiences tune in to watch Brazil play, they are treated to a rich spectrum of skin tones flashing vibrantly across the screen.

The racial makeup of the Brazilian squad, in fact, generally reflects the demographics of the country. According to 2017 data released by the census department, 47 percent of Brazilians identify as mixed-race, while another 8 percent identify as black.

Whereas in the U.S., only a tiny percentage of people identify as mixed race. President Obama, for example, who often cited his white nature and nurture while attempting to win white votes on the campaign trail, chose not to identity as mixed race on the 2010 Census.

… after abolition, the ruling class mounted a campaign to whiten the majority-black population, by fully subsidizing the immigration of over four million white Europeans, giving them free land, and compelling Brazilians to take up with them.

“The Brazilian people, more than any other, needs the influence of advanced peoples in building a race,” read one 1914 pamphlet, “especially at the historic moment when the percentage represented by the African race is beginning to decline and must disappear into the whirlpool of the white race.”

Segregation is bad but Integration is bad, too. It all depends up on Who versus Whom.

The op-ed goes on to make a frequent point of mine:

… When in 1965, Ebony magazine set out to explore why, at the height of the U.S. civil rights and African independence movements, black Brazilians had failed to mobilize in a similar fashion, it concluded that Brazil’s legacy of embranquecimento, or whitening, had a great deal to do with it.

Concerns over affirmative action fraud have plagued some of the most prestigious university programs, fostering unease on campuses. Students of complex heritages and identities report each other to administrators for not being black, or at least black enough. Episodes of mass expulsions occur multiple times a year — followed, inevitably, by lawsuits from the expelled students.

And the mechanisms put in place to curb potential fraud, predominantly in the form of in-person interviews with government-appointed anti-racism experts, have proved cumbersome at best and counterproductive at worst. In 2016, one government department in the state of Pará went as far as devising a candidate checklist that measured features such as nose-width, skull shape and hair curl tightness. The department retired the checklist following a national outcry.

As I pointed out in Taki’s earlier this year, the reason affirmative action works much more smoothly in the U.S. than in Brazil where there are constant squabbles over whitish people attempting to game the system to win quota prizes is because American whites hold themselves to an honor system when it comes to racial identity.

But in America’s current ideological climate over who are the Bad Guys and who are the Good Guys, who can notice that American whites tend to behave in an admirably self-denying fashion when it comes to affirmative action gaming?

Basically, wokeness is a form of cognitive shorthand for determining who are the Good Guys and who are the Bad Guys. Instead of having to laboriously work out via objective principles who in a situation is behaving better, you can just tell who is Good and who is Bad by looking at them or listening to them assert their identity claims.

Now, of course, there are endless unresolved complications and disagreements in terms of Intersectional Diversity Pokemon Points. But the holders of Pokemon Points can at least agree that Cishet White Males are Bad, which does a lot to paper over the cracks in the Coalition of the Fringes.