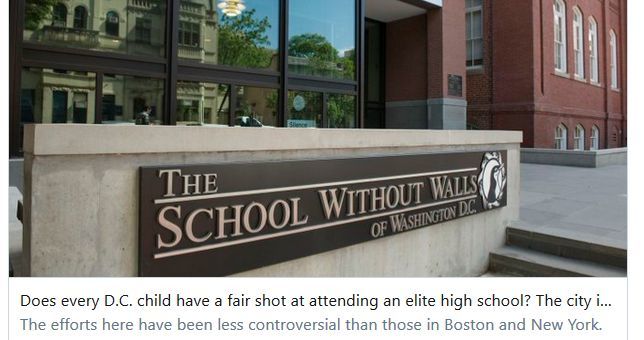 Having followed school test score statistics since 1972 and noticed that almost nothing ever changes other than that Asians are now pulling away from the field and American Indians have suddenly collapsed, I’m always struck by the flat learning curve of public school policymakers. They constantly go through a cycle of

A. Raising academic standards, only to discover, to their shock, that blacks and Hispanics are hit hardest,

B. After which they lower standards to increase Diversity-Inclusion-Equity (DIE), only to discover to their shock that Asians and whites won’t go to the dumbed-down schools.

For example, Washington DC, home to perhaps the world’s largest collection of think tanks, is, nonetheless, right now moving from the A Phase to the B Phase of this endless Cycle of Life in the Public Schools.

In the early 21st Century, almost no white students past elementary school went to the DC public schools. Since then, as The Plan to push African-Americans out of DC’s valuable real estate progresses, the white percentage climbed to 10% by 2017. Of course, white parents try to bunch up with other white parents in certain schools while avoiding other certain schools. So, the slow-moving antibodies of the DIE ideology are now laboriously moving to crush this development with Phase B.

Does every D.C. child have a fair shot at attending an elite high school? The city is trying.

The D.C. public school system is scaling back admissions requirements for the city’s selective public high schools, an effort to open elite classrooms to students who live in every corner of the city.

The changes aim to address a problem vexing application public schools throughout the nation: How do campuses remain selective while also creating classrooms that reflect the demographics of the cities they serve?

In New York, the mayor proposed an overhaul of the admissions policy governing the city’s eight elite high schools only to be met with a lawsuit and protests. The plan is on hold.

In Boston, the NAACP and Lawyers for Civil Rights have urged the city to change its admissions requirements to three selective high schools where black student enrollment does not reflect the city’s diversity.

And in the District, Schools Chancellor Lewis D. Ferebee said in October that he would overhaul application requirements for the city’s eight selective high schools, eliminating most testing requirements and reducing the minimum grade-point average from middle school necessary to gain entrance. Middle school attendance records will not be taken into account.

Students are guaranteed a slot at standard high schools in the traditional public system, but they have to apply to selective high schools. The idea is to create more academically rigorous campuses and schools that offer specialized courses.

In the District, nearly 4,000 of the city’s 20,000 public high school students attend an application campus.

“We asked our high school principals, who led our charge, how they can ensure there is equitable access and how we can remove our barriers,” Ferebee said.

The chancellor’s announcement comes just a year after the District mandated that students wanting to attend most of the city’s application high schools had to pass a national standardized test administered to D.C. middle-schoolers.

But the implications of that requirement swiftly became evident. So few D.C. students, especially teenagers from low-income families, passed the test that city leaders acknowledged the requirement was largely ignored at most application high schools.

Who could possibly have seen that the A Phase of the cycle would not lead to Diversity-Inclusion-Excellence? I mean, we are only 50 years out from Arthur Jensen’s December 1969 article in the Harvard Educational Review, “How Much Can We Boost IQ and Scholastic Achievement?” How can you expect elite opinion to notice in a mere half century?

… Among members of the 2017-2018 freshman class at Phelps ACE High School, an engineering-focused application campus, only two students passed the math portion of their standardized exam in middle school, according to data obtained through a public information request.

The school system said the testing requirement was haphazardly and inconsistently implemented, and officials decided to eliminate the requirement to ensure all students understand they have a shot at attending. …

“However the selection is made, and whatever the criteria is, it’s useful for policymakers to know what is going on here,” said Richard V. Reeves, a senior fellow at the Brookings Institution think tank who has studied selective high schools throughout the country. “Why are these kids here, and those not? We know what we’re arguing about.”

Sure you do. That’s why the school districts you advise keep cycling through the same mistakes over and over again.

Research by Reeves opens a window into why some school leaders think expanding access is critical. In a Brookings report, Reeves found that many selective high schools in the nation’s big urban school systems have a student body disproportionately made up of white students.

Like Stuyvesant HS in Manhattan is 93% Lily White (or to be, technical, it’s Lily White-Adjacent: It’s 74% Asian, but who is counting?).

So, death to Phase A of the Cycle. Onward to the glorious future of Phase B of the Cycle! (And then back to Phase A when Phase B fails. Rinse and repeat, ad infinitum.)