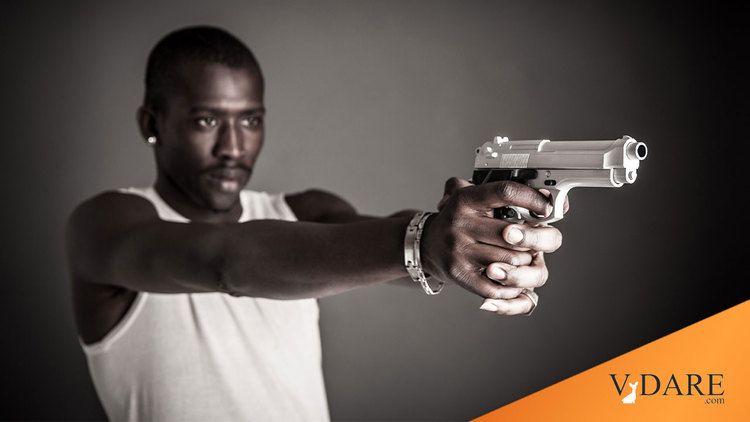 Blacks Commit 73 Per Cent Of All Justified, Self-Defense Killings—Mostly Of Other Blacks

Amy Swearer has a long thread of cases of black people acquitted on grounds of self-defense:

This idea that only white people are allowed to avail themselves of the claim of self-defense, or that they can largely just do whatever and get away with it by claiming self-defense, is absurd: a thread.

This is not news to me. In 2013, Eric Holder  attacked "Stand Your Ground" laws (not a factor in the Zimmerman case, Zimmerman was pinned to the ground by Trayvon Martin) because he thought the "victims" of self-defense (failed carjackers, armed robbers, home invaders, etc.) are disproportionately black.

This is true. In his 1993 review of Jared Taylor's Paved With Good Intentions: The Failure of Race Relations in Contemporary America, Peter Brimelow wrote this about  disparate crime rates:

Nor is the disparity caused by middle-class law enforcers over-concentrating on street crime. In 1990, blacks were nearly three times as likely as whites to be arrested for white-collar crimes such as forgery, counterfeiting, and embezzlement. And, finally and conclusively, blacks themselves are responsible for 73 per cent of all justified, self-defense killings. The vast majority of the people they kill are other blacks. [Invisible Men, National Review, January 18, 1993]

Barbara Holland is a black woman living in Detroit. Clabe Hunt was a black man. Clabe entered her small, used car dealership one day, asking all sorts of strange questions, and then left. Barbara is a woman with a concealed weapons permit...

Barbara is alive, and Clabe is dead, and quite right, too.

What Jared Taylor originally wrote in Paved With Good Intentions was this:

I realize these aren't recent figures; if you have a more recent source, email me at jfulford@vdare.com.