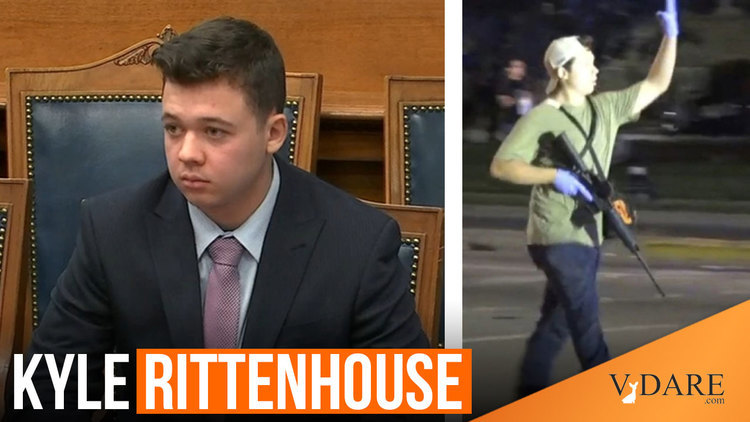 Kyle Rittenhouse isn’t out of the woods just yet. Though not guilty of reckless and intentional homicide and other charges, the federal Department of Justice just might come after him.

The feds might charge him with violating a statute that prevents straw purchases of firearms [Kyle Rittenhouse’s Friend Dominick Black Testifies He Bought The Gun Used In The Killings In Kenosha, by Bruce Vielmetti, Milwaukee Journal Sentinel, November 2, 2021]. Black purchased the AR-15 Kyle used that night, and planned to sell it to him when he turned 18. Technically that is a straw purchase under Federal law. Black could be charged, too.

DOJ might also try to charge Rittenhouse with civil rights violations. Just look at who runs the DOJ’s Civil Rights Division: that very angry, anti-white black woman, Kristen Clarke. She might decide that Rittenhouse showed up in Kenosha because he’s a racist, and that he shot three Black Lives Matters “protestors,” and tried to shoot a fourth, all of whom just happened to be hardened criminals. It will make no difference that child rapist Joseph Rosenbaum, domestic abuser Anthony Huber, and longtime criminal Gaige Grosskreutz are white. We don’t know the identity of Jump Kick Man, whom Rittenhouse fired at and missed, but he’s a career criminal, too. If he’s black, that just might give Clark the ammo she needs to go after Rittenhouse.

She could prosecute him for a hate crime and claim he conspired with Black to procure a weapon with the intent to kill blacks. She might also claim he injured people exercising their federally protected rights.

Would Biden or his attorney general, Merrick Garland, stop Clark? I wouldn’t count on it. Biden said Rittenhouse is a “white supremacist” and declared himself “angry and concerned” about the verdicts.

After all,  white Americans can’t think they’re allowed to defend themselves against rampaging communist mobs.