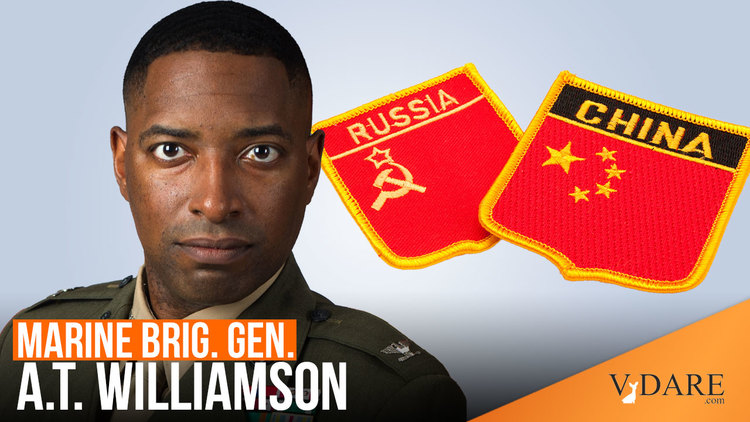 Regardless of the evidence piling up to the contrary to disprove the preposterous claim of our elites, they’ll always maintain “diversity is our greatest strength” to the moment the United States ceases being an actual nation. 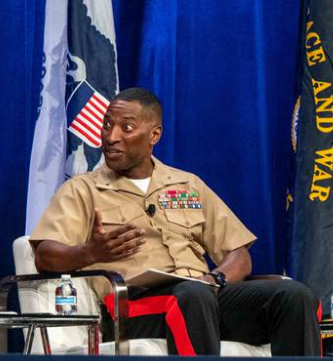 The Marine Corps needs increased diversity to fully implement the force design changes required to face off against China, Russia or other potential threats, said Marine Brig. Gen. A.T. Williamson [Pictured right, the A stands for Ahmed] director of manpower, plans and policy, in early August.

“The commandant right now is focusing on force design … the Marine Corps is making a concerted effort right now in investing in several capabilities,” Williamson said at the Navy League’s Sea-Air-Apace 2021 conference in National Harbor, Maryland. “But what the commandant has stated, and what we as Marines always know is, the primacy of that expeditionary force is the Marine.”

His remarks echo those made by Marine Corps Commandant Gen. David Berger in 2020 at the Women in Defense Virtual Leadership Symposium.

Some people “think that diversity — women, minorities — add” to the Corps’ success,” Berger said then. But it goes beyond that. “We can actually not do our mission in the Department of Defense, in the Marine Corps, without the dedication of women.”

Williamson laid out three reasons the Corps needs to be a diverse institution, which he termed the ethical, practical and operational imperatives.

“The American people need to know their military … reflects those they support and defend,” Williamson said, so the “ethical imperative” is simply to do the right thing in terms of inclusion and fairness.

The practical imperative, he said, refers to the Corps’ need to tap into a shrinking, but more diverse, pool of people in the country who qualify for the military.

“We don’t want to leave any talent on the table,,” the general said, “everyone is competing for the same talented pool of men and women. They are going to work somewhere.”

But, most important is the operational imperative, he said.

When looking at the complex battlefields of the future, “it is all about lethality and warfighting,” Williamson said.

“It’s challenging;, it is full of problem sets that one group — that one team — are not going to be able to solve alone,” he said. “We need to be able to open up the diversity of thought, of experience, of background, to try and attract people who are going to help us solve those very complex problems.”

Today, unconscious bias may play a role in unfairly forcing good Marines to leave the Corps or denying them opportunities to improve themselves, Williamson noted.

“If we see that a particular demographic or subgroup or element is not performing to standard or not performing as well as others, we ought to be intellectually curious enough to ask why, not just accept that and believe that that is going to fit a certain bias that we have,” he said.

Some biases are not only good, but necessary, for the Marine Corps to thrive, he said.

“There are negative biases, or there are biases that are misguided, misinformed or just flat out wrong,” he added.

The Corps must identify how those negative biases affect the evaluations, promotions and opportunities given to Marines, to take the “emotion” out of those processes and give every Marine a fair chance to succeed.

As long as our elites maintain the obvious lie “diversity is our greatest strength” and white people fear being called “racist” more than maintaining the civilization their ancestors created, the 21st century will belong to the Chinese.

The leaders of the Chinese military know they won’t have to even engage the U.S. Military in battle, when every branch of our military is infected with the belief diversity somehow matters in combat or among our troops.

Ask the Taliban how much “diversity” mattered among the U.S. military they battled for 20 years…