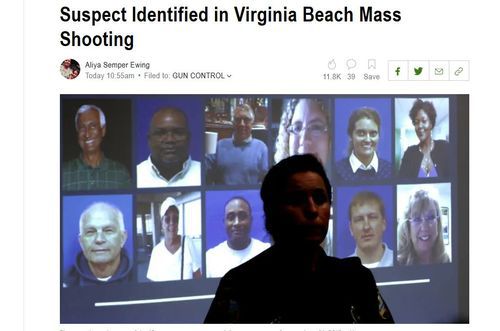 An item in The Root—a black website for black readers by black writers—discusses black gunman DeWayne Craddock this way:

"On Saturday Virginia Beach officials identified 40-year-old DeWayne Craddock as the lone gunman who opened fire on a municipal complex Friday afternoon, killing at least 12 and injuring many others. It is believed the shooting was retaliation for being terminated from his longtime job as a city worker."

At no point do they mention that Craddock was black, or the race of his victims (who included black and white coworkers.) However, the fact that he'd been fired is typical of these Disgruntled Minority Massacres.

According to The New York Times, public records show Craddock worked as an engineer in the Department of Public Utilities, the city’s water and sanitary sewer services branch, for about 15 years. He previously worked for private firms as an engineer. He’s said to have “no obvious criminal history” other than traffic violations. CNN reports that a 1996 news story shows he served in the Army National Guard as a private.

The Army training explains how effective he was—many black gunmen are not very good shots.

The suspect was armed with at least one weapon, a .45-caliber handgun that had a sound suppressor attached to it, according to New York Times. He’s said to have used extended magazines during the attack, which hold more ammunition than standard models. Officials claimed that so far there has been no indication that Craddock targeted specific people or employees during the rampage.

The suspect died during a shootout with police.

At a Saturday morning news conference Virginia Beach Police Chief James Cervera said he does not intend to say the name of the suspect again in public. The effort appears to be part of a larger push to withhold any resemblance of ‘fame’ or ‘public recognition’ to those who carry out disgusting acts of terror such as this one.

Right, as long as you start by saying he's black.

Dewayne Craddock, a 40-year-old longtime public works project manager in Virginia Beach, has been identified as the suspect killed after fatally shooting 11 people and wounding 6 others in an office building at the city's Municipal Center: https://t.co/4GGpy4O9R4 pic.twitter.com/5PXZtAVRcu

Otherwise, as I wrote ten years ago when a Korean immigrant shot up Virginia Tech,  the name may be the only clue.