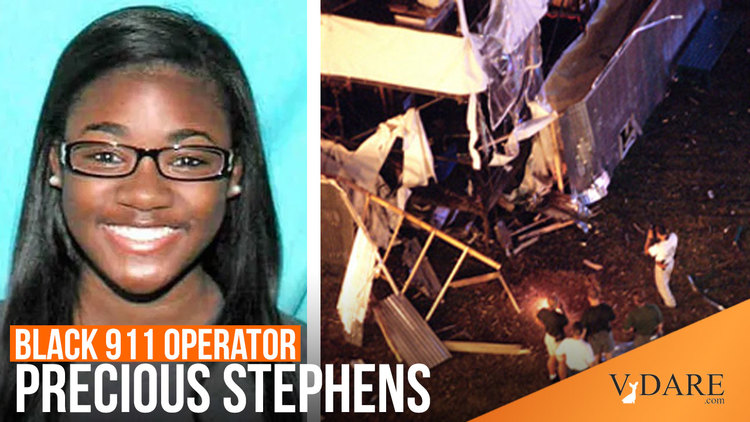 Black 911 Operators In New Orleans And At The Atlanta Olympics, 1996

A rogue 911 phone operator in New Orleans allegedly hung up on callers who dialed the emergency response line for help.

Precious Stephens, 25, faces charges of malfeasance and interfering with an emergency communication after disconnecting phone calls without getting any information or relaying the incidents to emergency dispatchers, the New Orleans Police Department said.

The Orleans Parish Communications District reported Stephens to police on Aug. 23 after investigating a random set of calls with Stephens during her shifts on Aug. 20 and Aug. 21, officials told NOLA.com.

For some reason, this reminded me of the black, female 911 operators in Atlanta in the Olympic bombing in 1996. They didn't hang up, but they might as well have:

At one point, the chronology shows this exchange between the operator and the dispatcher in the police precinct near the park:

Operator: "You know the address to Centennial Park?"

Dispatcher: "Girl, don't ask me to lie to you."

Operator: "I tried to call ACC {the Atlanta Police Department Agency Command Center}, but ain't nobody answering the phone. . . . But I just got this man talking about there's a bomb set to go off in 30 minutes in Centennial Park."

A longer version is here, clearly marked "The Following Section is Not a Parody."

For Steve Sailer's commentary on the Atlanta Olympics see Diversity Vs. Efficiency: The Olympic Moral, from 2002, when the Winter Olympics were held in much less diverse Utah.

The bombing itself is mentioned in connection with the FBI's attempt to frame Richard Jewell, a white security guard, for the bombing.

Apparently law enforcement can "profile" a white male security guard as a wannabe hero doing a false flag attack, but is forbidden by law to profile black female 911 operators as inefficient.