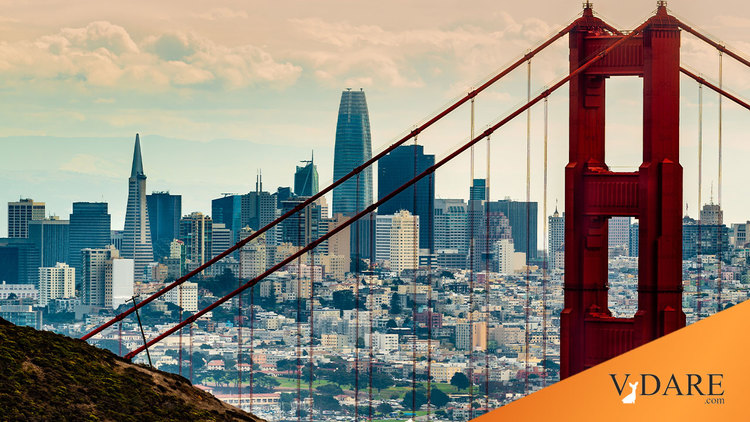 San Francisco To Launch "Cash For Criminals" Program: Pay Blacks And Hispanics $300 A Month Not To Shoot Each Other

So we have an admission by elected officials/public employees almost all the gun violence in San Francisco is committed by non-whites.

What’s the solution to this almost exclusively non-white violence?

Pay non-whites $300 a month not to shoot other people.

A local solution for gun violence? Pay people $300 a month: ‘We are trying to address the root causes of what’s happened’, San Francisco Examiner, August 30, 2021

San Francisco thinks it may have an answer for its rising gun violence problem: Paying people to not pull the trigger.

The idea is to provide the small number of San Franciscans who authorities believe are most at risk of shooting someone — or being shot — with an incentive to get help and stay out of trouble. It’s a solution that proponents say already has shown promise preventing gun crimes in other parts of California.

At worst, the program could be called “cash for criminals,” like its predecessors in cities around the Bay Area. At best, it could save lives and tax dollars otherwise spent on incarceration.

The program, which will launch as a pilot in October, is called the Dream Keeper Fellowship. It’s San Francisco’s latest iteration of a guaranteed-income program that will provide high-risk individuals with $300 a month as a start.

Participants will be able to earn up to $200 more a month by hitting milestones in the program, such as landing a job interview, complying with probation or consistently meeting with a mentor.

The initiative will pair participants with newly hired life coaches from the Street Violence Intervention Program, known as SVIP, who will help the them make the right choices and access services.

The theory is that the up to $500 stipend will serve as an incentive to participate — and stay engaged.

“We know that $500 in San Francisco is not a significant amount of money,” said Sheryl Davis, a proponent of the program and executive director of the Human Rights Commission. “But if it’s enough to get you in to talk to folks, and be able to make a plan for your life, then that’s huge.”

This isn’t the first time a city has tried to reduce gun violence by offering cash. A similar anti-violence program in Oakland, for instance, offers young adults up to

300 a month without having to meet any marks.

The program is modeled, in part, after the nationally watched Operation Peacemaker Fellowship in Richmond, which offers similar stipends of up to $1,000. A 2019 study published in the American Journal of Public Health linked the program to a 55% decrease in gun homicides and 43% decline in shootings since it began in 2010.

Officials want to kick off the latest program with about 10 participants in October, before expanding the stipends to another 30 high-risk individuals by the end of the year, officials said. They’ve already hired two life coaches to work with participants at SVIP and are looking to hire two more.

“What we are actually doing is trying to address the root causes of some of what’s happened,” Davis said. “Six thousand dollars per person, when you look at it annually, is nothing if it helps deter criminal activity compared to the amount of money it costs to incarcerate someone, let alone the impact of the activity itself.”

The program is being rolled out by the Human Rights Commission and Office of Economic and Workforce Development. It’s being funded in part through the Dream Keeper Initiative, an effort from Mayor London Breed and Supervisor Shamann Walton to divert funding from law enforcement to the Black community.

Breed recently touted the idea as being an effective anti-violence solution.

“My desire is to get to them, not to just make an arrest, but to get to them and to try and figure out if they would be willing to work with us on something that is an alternative,” Breed said at a Violence Prevention Summit hosted by the Human Rights Commission earlier this month. “We can’t just put them in a program without making sure that they have money, without making sure that they have something to take care of themselves.”

The program builds on an analysis commissioned by the San Francisco Police Department that showed just how tangible solving gun violence in The City could be.

The analysis found that conflicts between just 12 street groups or gangs are driving the majority of gun violence in San Francisco. The groups tend to be made up of young Black and Latino men with extensive criminal histories who are considered very high-risk individuals.

The key takeaway for city officials and experts was the conflicts involve a small number of people — not the entire Black or Latino communities.

“When you look at it, you see it is a tightly concentrated, small number of people who have similar risk factors who are identifiable,” said David Muhammad, executive director of the National Institute for Criminal Justice Reform. “The violence is predictable, and therefore it is preventable.”

To repeat: Hard to care about what’s happening in Afghanistan when local governments across the USA are actively working to de-criminalize crime and then pay individuals who should be behind bars a monthly stipend just for not behaving civilized.

Don’t shoot someone and be a person of color in the process? Here’s a stipend of $300/per month for doing what basically every white person in America does 365 days a year.

Crime, perhaps it should be “pre-crime”, does pay.