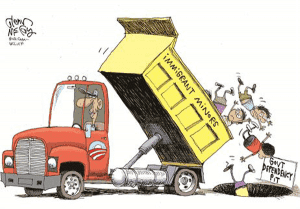 Once in a while in the peculiar dynamics between (much repressed) American popular opinion and Congress, funny things happen. It looks like the arrogance of the Obamacrats may be triggering such a moment.

...the famously tight-fisted Senator Tom Coburn (R-OK) observed on CNN’s Crossfire, “For $8 million we can put them all on a first-class seat back to their homes.”

Although Obama asks for lots of money to take care of people permanently, he gives zero details about a timeframe for deporting or repatriating any of the persons involved.

The $250 a day figure compares with the $667 one-way cost of an airline ticket from McAllen, Texas, to Guatemala City, Guatemala, according to both Orbitz and Priceline. The combined airfare for 29,358 passengers would be $19.6 million. That is one-half of 1 percent of President Obama’s overall $3.8 billion request. Volume discounts and government rates would yield even lower fares. But even without discounts, sending everyone home right away saves taxpayers 99.5 percent!

And today here is Senator Ron Johnson of Wisconsin

"I can't see how I can support this thing," Johnson told J.D. Hayworth on "America's Forum" on Newsmax TV on Wednesday. "Just look at the numbers."

"I've gone online and have taken a look on Orbitz and taken a look at what does it cost to fly people to El Salvador and Guatemala and Honduras," Johnson, a Republican, said. "You have fares as low as $207. There's nonstop flights at $450."

Of course the explanation is simple: President Obama has a No Borders policy. This money is for facilitating  the swamping the Historic American Nation, not for Border Control.

Johnson however is a significant case. Since being elected with Tea Party support in 2010 he has shown all the signs of Country Club Republicanism, including voting for Cloture for the Senate Amnesty/Immigration Surge Bill last year, rendering his Nay on the Bill itself worthless. Judging by the details of his NumbersUSA B+ ranking due process and form matter as much to him as the end result.

If this type of Congresscritter is getting restive, the Obamacrats have a problem.

So does the AdelZuck control faction in the Congressional GOP.