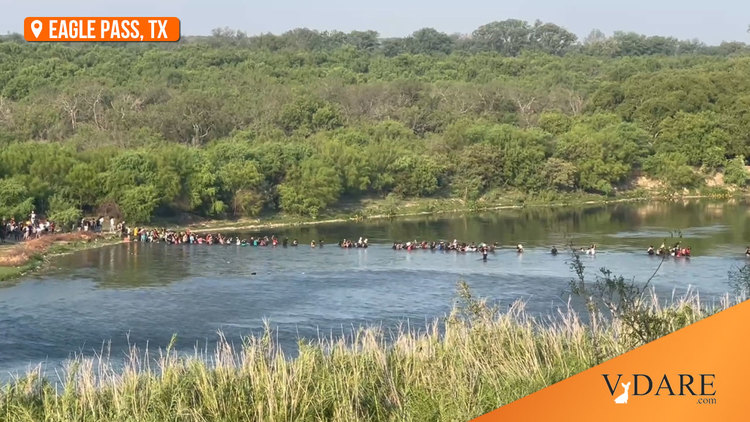 Fox News’s intrepid Bill Melugin, who documents The Great Replacement almost daily on his Twitter feed, posted what might be the most shocking video of just what border agents face thanks to Traitor Joe’s border treason. But it also demonstrates why the agents have been turned into lifeguards, and depicts the steady increase in large groups the agents must stop.

“Hundreds upon hundreds,” Melugin wrote over the video. “Coyotes guiding them in water.”

BREAKING: One of the most massive single groups we have ever witnessed cross illegally at the border is crossing into Eagle Pass, TX right now. The line of people went so far into the trees it’s hard to get a count. Hundreds upon hundreds. Coyotes guiding them in water. @FoxNews pic.twitter.com/ZjZIygarAv

And later in the thread:

Two cartel guides in the water are now wading back to Mexico. This was about as clear of an example of a large scale cartel smuggling op as you’ll see.

The entire group has now crossed over to the U.S. side and is beginning to emerge from the brush along the river. Two cartel guides in the water are now wading back to Mexico. This was about as clear of an example of a large scale cartel smuggling op as you’ll see. @FoxNews pic.twitter.com/81esACvS0j

Agents also busted two stash houses packed with 33 illegals; 29 in one; four in the other.

Agents foiled a smaller smuggling attempt when they caught eight illegals from Honduras and Guatemala. They bailed out of a Ford-150 pickup that zoomed through an inspection point and mowed down a ranch fence.

No wonder morale is so low among border agents. Traitor Joe has opened the border, might punish them for doing their jobs, and then defy federal immigration law and release the illegals they apprehend.

Yet Stupid Party leaders say they won’t impeach the man. If true, the only questions are: When will the country reach the tipping point, if it hasn’t already, and when must the Historic American Nation resign itself to dispossession and replacement.