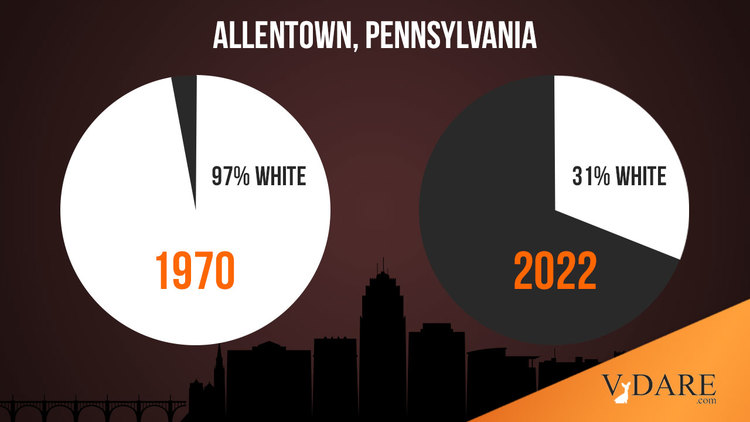 This is what you call the MSM spiking the football and refusing to pull the starters.

What Allentown, Pennsylvania Can Teach Us About the Changing Face of America, by Tori B. Powell, CBS News, July 7, 2022

Gary Iacocca recalls his grandfather’s hot dog shop in downtown Allentown, Pennsylvania consistently hosting non-stop crowds of people. That is, until what he described as a changing neighborhood forced the family establishment to operate elsewhere.

Part of what’s different in Allentown is its racial makeup. In the 1970s U.S. Census count, the city’s population was 97% White, but by 2020 the share of hon-Hispanic White residents had plunged to 31%.

The city is among many throughout the nation with changing demographics. Census data shows that the number of White Americans decreased over the last decade across 35 states and within 3 out of 4 counties. And according to projections from the U.S. Census, America is forecast to no longer have a White majority population by 2044.

In three separate studies with different methodologies, the belief that the rights of minorities will overtake that of whites, an unfounded conspiracy theory known as the “Great Replacement,” was one primary driver for “insurrectionists,” researchers found.

Statistical analysis showed that for every 1% decline in the non-Hispanic White population, a county was more than six times more likely to send at least one “insurrectionist.”

Another study found those believing that the rights of Hispanic and Black people are overtaking white people increases the odds of being in the “insurrectionist movement” threefold. The third study found that those with the fear that Hispanic and Black people will have more rights than White people increases the chances of being in the movement twofold.

Allentown resident Emely Minaya, who came from the Dominican Republic as a child, says she thinks Allentown is an example of the future of America when it comes to diversifying communities.

“Even those states where there’s probably no Hispanics at all, no Black people, they will be seeing a lot of that in next few years,” she said.

Asked what she would say to those who may be troubled by that potential demographic shift, she says to “suck it up.”

The Great Replacement is just a racist myth, unless it can be used by the Corporate Media to laugh at the displacement of white Americans by mass immigration.

“Suck it up,” white America. Your past is being erased because you are too afraid of being called a racist to defend a nation your white ancestors once dedicated to “our posterity.”

The Great Replacement is happening. Our Corporate Media is now telling us to “suck it up,” and embrace it, at the expense of our American history (which is white).