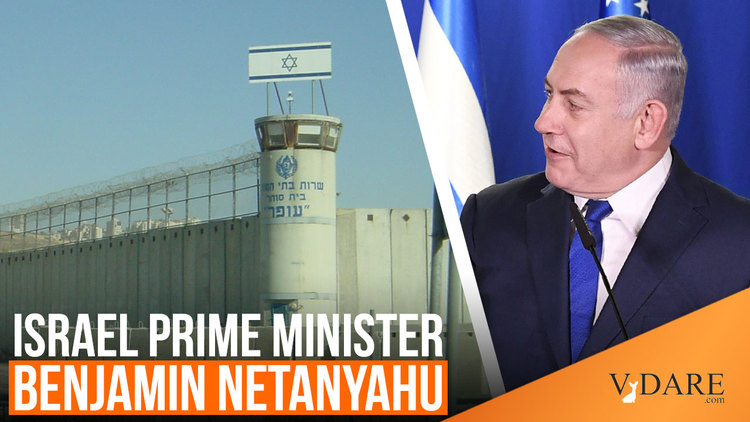 Earlier: This Day In VDARE.com History, 2014: Netanyahu Acts To Protect Israelis From Treasonous High Court: GOP Should Do So For Americans!

(JTA) — Israeli Prime Minister Benjamin Netanyahu offered his take Tuesday on a recent Supreme Court decision requiring the government to recognize Reform and Conservative conversions performed in Israel: It could lead to the country being “overrun” with “fake” Jewish converts from Africa.

… He suggested that the court decision could allow African asylum seekers to take advantage of Israel’s Law of Return, which grants automatic citizenship to any Jew who applies.

“The real question we have is [how] to prevent fake conversions that could enter the country,” he said in the interview, which was broadcast by the Tel Aviv International Salon. “You know, a lot of people want to come into Israel. In fact, I put up a fence, they call it a wall, but I prevented the overrunning of Israel, which is the only first-world country that you can walk to from Africa. We would have had here already a million illegal migrants from Africa, and the Jewish state would have collapsed.”

Netanyahu And ImmigrationKritarchyIsrael and immigration
<< Previous
Next >>
LATEST