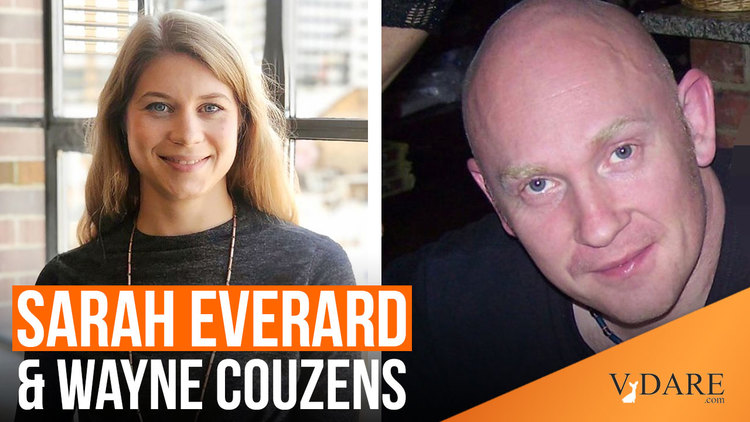 But the women of Northern Europe weren’t supposed to talk about the increase in street crime and catcalls, because most of the men bothering them were immigrants or of immigrant ancestry. Instead, they were supposed to man up and not mention it.

But now, a pretty blonde woman professional class woman named Sarah Everard has been murdered and — mirabile dictu—for once the man arrested turns out to be white. And a policeman! A middle-aged English family man, the Great White Defendant. He’s exactly whom the Theory of Intersectionality would predict would be preying on women. So, the topic of street crime against women is finally not politically incorrect.

So, suddenly, Englishwomen feel liberated to say out loud all the times they’ve felt unsafe on the streets of late. From the Wall Street Journal news section:

The abduction and murder of 33-year-old marketing executive Sarah Everard has unleashed a torrent of concern over women’s safety in London and the rest of the U.K., with thousands of women recounting their own stories of harassment in a fresh upsurge in support for the #MeToo movement.

Ms. Everard went missing after leaving a friend’s apartment in south London on March 3, triggering a police search across southeast England. On Friday, police confirmed that remains found in a wooded area southeast of the capital were hers and that an officer with London’s Metropolitan Police, 48-year-old Wayne Couzens, had been arrested and charged with Ms. Everard’s kidnapping and murder.

The case has struck a nerve in Britain, in part because Ms. Everard had done many of things women are often advised to do to ensure their safety.

She wore bright, visible clothing when she left her friend’s apartment in Clapham at 9 p.m. for a walk home to Brixton that should have taken 50 minutes at most. She had called another friend to say she was on her way. And she had stuck to well-lit main roads. Yet she was abducted—and, investigators suspect, by a policeman.

For example, here is a much-cited March 12 column by a Guardian columnist:

At 4.56pm on a spring afternoon, countless women in the UK were being harassed on the street. It turns out I was one of them

Her description of the abuser is non-existent. If her abuser was white she’d have mentioned it.

Hopefully, some good will come of this horrible crime in that the British finally have a white boogeyman to justify cracking down on Muslim and black street crime against women.

On the other hand, this being the Current Year, it’s likely that this opportunity will be wasted due to SJW lunacy. From the Daily Mail:

‘Men just don’t understand the pressure that women are under’: Green Party’s Baroness Jones doubles down on her call for a 6pm curfew for men after Sarah Everard’s death