In a more civilized age, every individual who was responsible for unleashing a "rape" culture at Baylor University via the recruitment of black high school football players to the campus would be arrested, have all of their assets seized, and thrown in a prison full of convicted black criminals for the rest of their lives.

But Baylor is just the tip of the iceberg, with campuses across the nation recruiting black high school football and basketball players who have absolutely no academic business attending the schools save for their perceived athletic superiority over white athletes.

My book Opiate of America: College Football in Black and White came out a few years prior to the revelations coming from Waco, Texas, that—in a more civilized era—would have resulted in every individual who participated in enabling the black "rape" culture to permeate the campus or helped cover it up facing firing squads for their promotion of evil.

And make no mistake, what happened at Baylor is far more evil than the events at Penn State and their homosexual predators.

Let's go back a few months.

A Baylor University graduate who says she was raped by football players in 2013 sued the university Friday. Her lawsuit includes an allegation that 31 Baylor football players committed at least 52 acts of rape, including five gang rapes, between 2011 and 2014 — an estimate that far exceeds the number previously provided by school officials.

'Show 'em a good time' The lawsuit describes a culture of sexual violence under former Baylor football coach Art Briles in which the school implemented a "show 'em a good time" policy that "used sex to sell" the football program to recruits.

That included escorting underage recruits to strip clubs and arranging women to have sex with prospective players, the suit alleges. Former assistant coach Kendal Briles — the son of the head coach — once told a Dallas-area student athlete, "Do you like white women? Because we have a lot of them at Baylor and they love football players," according to the suit.

"Do you like white women? Because we have a lot of them at Baylor and they love football players..." 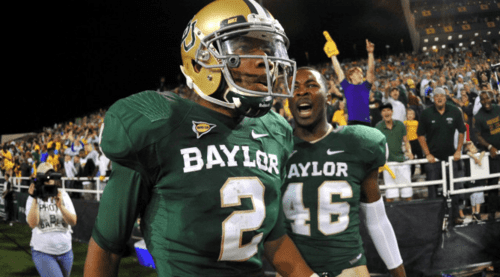 At every Southeastern Conference (SEC) and Atlantic Coast Conference (ACC) university, this type of recruiting tactic has existed for decades, ever since integration brought black athletes in to Tuscaloosa, Athens, Gainesville, Auburn, Starkville, Clemson, Oxford, Baton Rouge, Knoxville, Chapel Hill, Durham, Charlottesville, and campuses throughout the Big Ten, Pac-10, Big 12 and even at schools like Brigham Young and Notre Dame.

While Rolling Stone and feminists dream up rape culture fantasies involving hated white males belonging to fraternities (carefully guarding and perpetuate white privilege as the guzzle down Coors Light listening to an 80s cover band), black athletes at Baylor were engaging in rape parties for "bonding" purposes. All of which was known by many of the coaches on the football staff and by administrators hoping this black rape culture would enable Baylor to field a winning team on Saturdays.

The latest blow to Baylor's ongoing troubles came in the form of another Title IX lawsuit against the school on Wednesday morning.

The victim in the suit played volleyball at the school from 2011-13.

According to the lawsuit filed late Tuesday, the victim was "brutally gang raped by at least four and, according to some reports, as many as eight, Baylor football players."

She claims the university was "indifferent" in responding to hers and multiple other cases of sexual assault.

Because of the school's "failure to promptly and appropriately investigate and respond to assaults," it directly put this victim and others in direct danger of being sexually assaulted.

"Photographs and videotapes of the semi-conscious girls would be taken during the gang rapes and circulated amongst the football players," it reads.

According to the lawsuit, at least one 21-second videotape of two female Baylor students being gang raped by several football players was circulated amongst the team.

Along with spelling out the rape culture at Baylor, this latest suit also alleges dog fighting at football parties and makes accusations against the Baylor Bruin hostess program.

"Do you like white women? Because we have a lot of them at Baylor and they love football players..."

In a more civilized time, college football was a sport played by actual student-athletes, passionately followed by alumni and the student body who cheered on teams whose starters and substitutes were white men.

As   Opiate of America: College Football in Black and White documents, America's collapse closely correlates with the full integration of ACC, SEC, Southwestern Conference (SWC), and other college football programs in the late 1960s/early 70s, and the slavish devotion white alumni developed to black athletes—blacks, mind you, they avoid in every other aspect of their life—and their ability to produce victories and championships.

Baylor University is a reminder what was sold for this momentary glory. It's terrifying to think how similar events have played out—encouraged and then covered up—nationwide over the years, just so white alumni can say "Roll Tide," or "War Eagle," or "Go Dawgs, Sic em."