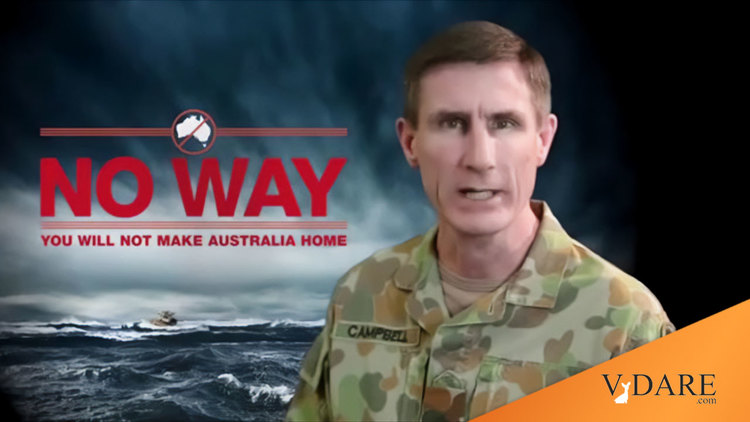 And one final point on immigration. You may recall that seven years ago Australia, fed up with illegal aliens arriving by sea, launched Operation Sovereign Borders. The boat people were returned to their country of origin; or, when this couldn't be done, interned in grungy camps on remote islands until they got fed up and repatriated themselves.

Then in 2016, as one of his final flourishes of virtue signaling, Barack Obama cut a deal with the Australians to import 1,250 of these illegals languishing in island camps into the U.S.A. They would be counted as "refugees," placed quietly in U.S. towns and cities, and put on welfare. These are mostly young Muslim men from Afghanistan and the Middle East.

The indefatigable Ann Corcoran at her Refugee Resettlement Watch website has been doggedly tracking this issue. Posting on December 14th, Ann reveals that, believe it or not, these bogus refugees have a lobby in the U.S.A.

It's called Ads-Up (for Aussie Diaspora Steps Up) and of course it has a website, ads-up.org. Ads-Up was co-founded by two activists, one based in New York and the other in Washington, DC. On the website they boast that, quote:

We've recruited over 300 Australian supporters in the United States to help hundreds of refugees from Manus and Nauru who are starting new lives in a new country. Manus and Nauru are two of those islands where the Australian government parks illegals.

Here's my suggestion. The U.S.A. has all the love-the-world gentry progressive busybodies we can use. We don't need to be importing more, like those 300 Australian supporters the Ads-Up website boasts about. They should all be sent back home to Australia to improve the quality of social justice down there.

Or, if they don't want to go, we have plenty of remote and inhospitable islands of our own—in the Aleutians, for example—where we could intern them until they change their minds.