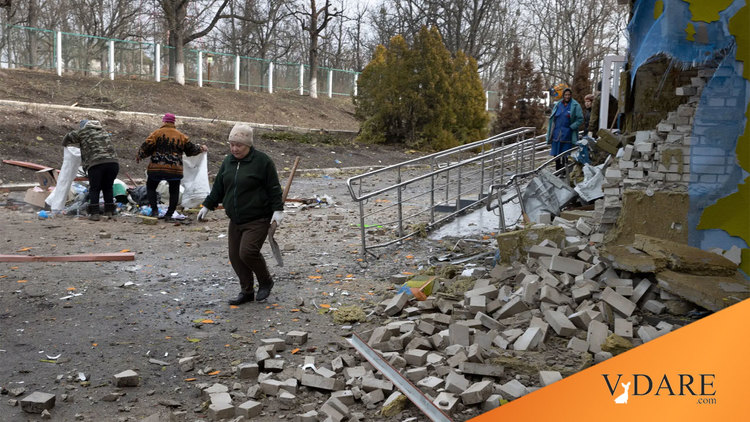 Atrocities In The Ukraine

I don’t know what happened in Bucha, Ukraine, where numerous dead men in civilian clothes, some with their hands bound, were found lying by the side of the road as the Ukrainians recently recaptured the place. 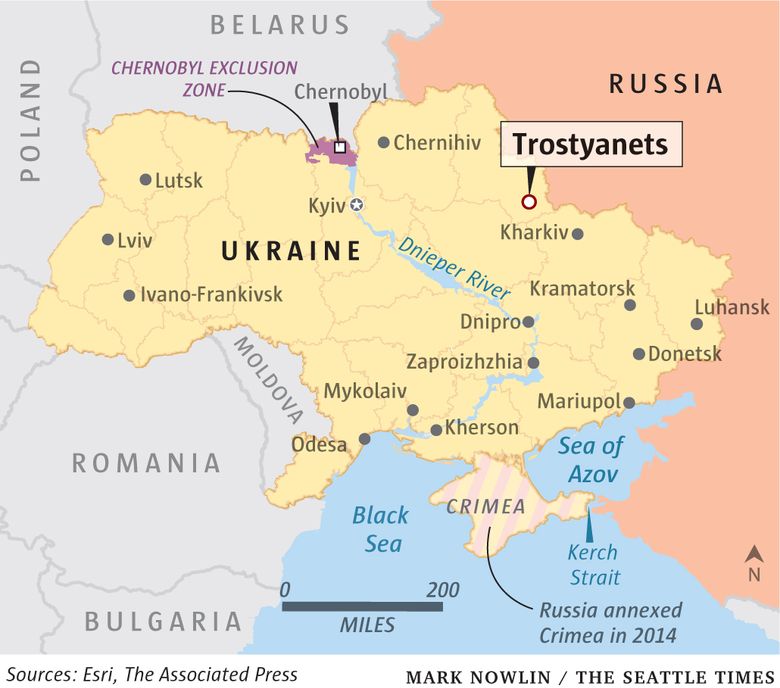 But it’s worth looking at an account of the Russian occupation of Trostyanets, which Ukrainian troops retook back on March 26, to get some sense of the various factors that might have gone into the Bucha massacres. The dust has settled more in Trostyanets than in Bucha. In the former, it appears at first glance that atrocities were more limited than in the latter, but looking at Trostyanets in depth might give some clues to what could have driven the war crimes in Bucha.

It also shows how the Russian military’s inability to win a quick victory — in which it would “liberate” a friendly population — left its soldiers in a position that they were vastly unprepared for: holding an occupied town with an unwelcoming local populace. …

In an armored invasion focusing on (hopefully) moving fast and breaking things as the front rapidly advances, how do you keep the people in the areas you conquered from either stabbing you in the back with partisan attacks, or just rioting and looting amongst themselves?

One solution is to have a giant army with lots of men to serve as occupation MPs.

The U.S. is said to have come up with a more creative solution for its 1943 conquest of Sicily, Rather than slow down to impose order upon the Sicilians, the U.S. Army brought along its own Sicilian-American men of respect, men who have friends who have friends, and gave them de facto control over the occupied civilian areas to organize their old networks that the Northern Italian Mussolini had diligently stamped out over the last two decades: i.e., the Mafia. (Note that this interpretation is contested, but it gives some sense of the issues involved with occupations.)

Interviews with more than a dozen residents of Trostyanets, a modest town of about 19,000 situated in a bowl of rolling hills roughly 20 miles from the Russian border, paint a stark picture of struggle and fear during the Russian occupation. The unrelenting violence from both Ukrainian and Russian forces fighting to retake and hold the town raged for weeks and drove people into basements or anywhere they could find shelter. …

The war began in Trostyanets on Feb. 24, the day the Russians launched their invasion of Ukraine. The town quickly became a thoroughfare for advancing Russian tank columns as they punched farther west, part of their northeastern offensive toward Kyiv, the capital. Thousands of armored vehicles rolled through, breaking highway guard rails and chewing up roads.

“As the Russians drove in, for the first two days, our guys fought back well, so long as they had heavy weapons,” said Mr. Panov, 37. “After they ran out of those, they were left only with rifles.”

Farther west, the offensive blitz toward Kyiv soon encountered fierce Ukrainian resistance, stopping the Russians short of the capital, meaning that soldiers would have to occupy Trostyanets rather than just move through it. Roughly 800 troops fanned out, constructing a dozen or so checkpoints that cut the town into a grid of isolated neighborhoods.

Residents say they rarely tried to move through the Russian positions, though they described the occupying soldiers as amiable enough in the first days of the occupation, and more confused than anything.

“The first brigade of Russian forces that came in were more or less tolerable,” Dr. Volkova said. “They said, ‘OK, we will help you.’”

That help, Dr. Volkova explained, was just allowing them to pull corpses off the streets. She added that roughly 20 people had been killed during the occupation and the ensuing fighting — 10 had suffered gunshot wounds.

On a few occasions, the Russian troops opened “green corridors” for civilians to leave the town, though that was when some people — mostly younger, military-age men — were abducted.

Early in the occupation, Trostyanets’s police officers took off their uniforms and blended into the populace. Those who were in Ukraine’s Territorial Defense, the equivalent of the National Guard, slipped out to the town’s periphery and worked as partisans — documenting Russian troop movement and reporting it to the Ukrainian military.

Others remained in the town, quietly moving to help residents where they could, even as Russian soldiers hunted them. “We were here during the whole time of occupation, working to the best of our abilities,” explained the police chief, Volodymyr Bogachyov, 53.

I don’t understand the complex legal subject of unlawful combatants. There is much about combatants out of uniform and what can and cannot be done to them. For example, during WWII, the US Supreme Court ruled that the eight German saboteurs who had been landed by submarine in the U.S. in civilian clothes were not eligible for the protections afforded to prisoners of war and therefore could be executed:

The spy who secretly and without uniform passes the military lines of a belligerent in time of war, seeking to gather military information and communicate it to the enemy, or an enemy combatant who without uniform comes secretly through the lines for the purpose of waging war by destruction of life or property, are familiar examples of belligerents who are generally deemed not to be entitled to the status of prisoners of war, but to be offenders against the law of war subject to trial and punishment by military tribunals.

On the other hand, policemen and national guardsman of an invaded country who take off their uniforms to continue to help their country defend itself against the invader by blending into their own home neighborhood’s civilian population while carrying out spy and sabotage activities are vastly more sympathetic cases than submarine-landed saboteurs. If you are upset about the perfidy of the locals who took off their uniforms of the country you invaded, well, maybe you shouldn’t have invaded in the first place? In general, if you don’t want to get into these kinds of sticky situations that invading another country so often leads to, then don’t invade.

As the days and weeks went by, food became scarce and any good will from the soldiers vanished, too. Residents boiled snow for water and lived off what they had stored from their small gardens. Russian soldiers, without a proper logistics pipeline, began looting people’s homes, shops and even the local chocolate factory. One butcher spray painted “ALREADY LOOTED” on his shop so the soldiers would not break in. On another store, another deterrence: “EVERYTHING IS TAKEN, NOTHING LEFT.”

By mid-March, the Russian soldiers were rotated out of the town and replaced by separatist fighters who were brought in from the southeast.

The guys who have been fighting for 8 years on the Donetsk front, such as Ukraine’s Azov Battalion and Moscow’s Night Wolves motorcycle gang, tend to have a reputation of liking violence more than the regular soldiers.

It was then, residents said, that atrocities began to mount.

In other words, the initial regular Russian troops behaved fairly well, at least until they got hungry. That was my impression from various videos on pro-Ukrainian sites: that when confronted with angry Ukrainians, such as in demonstrations in Kherson, Russians troops looked agitated but not all that trigger-happy.

The funniest video showed three Russian soldiers breaking into a barnyard to find something to eat. The elderly Ukrainian farm couple come out and yell at them, and intruders eventually slink off shamefacedly. The couple’s little dog was hiding when they broke in, but as they retreated, his courage mounted and he rushed out to bark righteously at their departing backs.

Granted, pro-Ukrainian sites were promoting these videos to show the courage of Ukrainian civilians standing up to the Russian war machine, but they also gave the unintended impression that the typical Russian soldier was trying, when pressured, not to be a war criminal.

But the longer wars go on, the worse stuff happens.

“They were brash and angry,” Dr. Volkova said. “We could not negotiate with them about anything. They would not give us any green corridors, they searched the apartments, took away the phones, abducted people — they took them away, mostly young men, and we still don’t know where these people are.”

As of Friday, the town’s police had received 15 reports of missing people.

In the morgue, beside the three dead Russian soldiers, Dr. Volkova pointed to a body bag in the corner of the room. “This person was tortured to death,” she said. “His hands and legs are tied up with sticky tape, his teeth are missing and almost all of his face is gone. It’s unknown what they wanted from him.” …

By Friday afternoon, Mr. Bogachyov, the police chief, was sorting through reports of townspeople who had collaborated with the former occupiers, as well as trying to address continued looting. Yet no one had issues siphoning fuel from the abandoned Russian tanks dotting the roads.

“The info is such as, ‘This person was talking or drinking vodka with the Russians,’ and, ‘This person pointed to them where is the home of the person they were looking for,’” he said.

“There is no information on collaborations such as our citizens taking arms along with the occupants or treating their own citizens with violence,” Mr. Bogachyov said, acknowledging that it was hard to tell if he was contending with Russian spies or just neighborly grudges.

Any reports of collaborators disappearing or suffering unfortunate accidents after the invader retreated? Such things have been known to happen.

In summary, invasions can lead to all sorts of bad things happening for all sorts of reasons, so a good rule of thumb for preventing them is: don’t invade.

On the other hand, it would be really stupid for America to stumble into fighting a land war in Europe and/or a nuclear war as a way to express wrath over some war crimes.