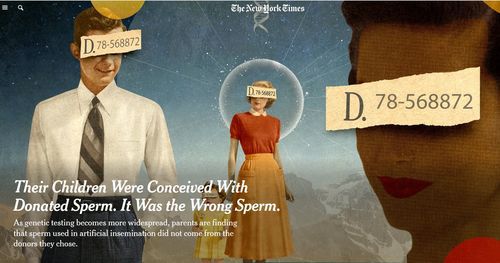 Quantitatively, artificial insemination is a big deal by now, with perhaps a couple of million Americans having been conceived the new-fangled way. I haven’t much looked into it since reviewing David Plotz’s 2005 book about the Nobel Prize Sperm Bank, but the sperm bank side of the industry always struck me as a little slapdash.

There are the periodic scandals involving fertility doctors who father scores of children, but then are the questions like: how reliable are reported SAT scores of donors? The New York Times reports today that basic quality control — getting the right test tube — is sometimes shoddy.

Their Children Were Conceived With Donated Sperm. It Was the Wrong Sperm.
As genetic testing becomes more widespread, parents are finding that sperm used in artificial insemination did not come from the donors they chose.

… There are no national statistics on the number of children born through artificial insemination each year, although some experts have estimated the number may be as high as 60,000. And no one tracks the number of people who find that the sperm they purchased is not from the donor they chose.

But in the age of consumer DNA testing, the anecdotes are piling up. Increasing numbers of parents, or sometimes their donor-conceived children, are discovering that the wrong sperm was provided by a sperm bank or fertility clinic often decades after the fact.

The constant trickle of cases is raising tough questions about whether sperm banks and fertility clinics ought to be better regulated.

Has any firm developed an outstanding reputation as the gold standard for quality?

Regulation can sometimes help an industry. For example, Elizur Wright, one of those titanically energetic 19th Century post-Puritan reformers, is the father of the American life insurance industry because he was the father of life insurance regulation. A self-trained actuary, he did the calculations that changed the life insurance business from something between a fiasco and a scam into a science.

“These stories are extraordinarily heart-wrenching and really challenging for the law,” said Dov Fox, director of the Center for Health Law Policy and Bioethics at the University of San Diego. “They’re also far more common than we know.”

“Sperm banks are very lightly regulated, and these kinds of switches or mix-ups aren’t altogether unforeseeable when you learn of the number of sperm banks using outdated methods of labeling specimens, such as pen and paper,” he added. …

There are few legal remedies for parents who receive the wrong sperm, Melissa learned.

“I wasn’t interested in trying to sue, because I love my daughter,” she said. “Also, I’d have to sue for wrongful birth, and if there is no health issue involved, then there’s no wrongdoing on their part.”

Jennifer Cramblett of Uniontown, Ohio, filed suit against Midwest Sperm Bank in 2014, in the Chicago area, after learning that she and her female partner had mistakenly been given sperm from the wrong donor.

Indeed, the couple’s child was clearly biracial, although the donor they’d selected was white. Sperm vial numbers at the bank were written in pen and ink, and the facility’s records were not computerized, the suit claimed.

But the judge threw out the case, saying it was not a “wrongful birth” because Ms. Cramblett’s child had no health problems.

While clients like her may believe that getting the wrong sperm is fraud, courts have long maintained that there is no injury if the child is healthy.

“A court could say, you didn’t get the donor you wanted, but how can you say that you’re worse off? How do you know that one donor is better than the other?” said Sonia Suter, a law professor at George Washington University who specializes in bioethics and health policy.

“There isn’t a legal mechanism here to address what seems to be a clear wrong,” she added. …

Legal changes may be coming, prompted in part by a profoundly disturbing case.

In the 1970s and 1980s, a fertility doctor in Indianapolis used his own sperm, rather than a husband’s sperm or that of an anonymous donor, to impregnate at least 46 women.

Dr. Donald Cline pleaded guilty to two felony obstruction of justice charges and admitted that he lied to state investigators about using his own sperm to inseminate patients. He surrendered his medical license and was given a one-year suspended sentence.

State prosecutors said they weren’t able to press for a tougher sentence because there were no state laws prohibiting this conduct.

Sixty people now believe this former doctor is their biological father, based on DNA testing. …

Mr. White and some of his recently discovered half-siblings pushed to make “fertility fraud” a felony in Indiana. The measure was signed into law by the governor earlier this month.

The law covers cases of deception that involve a medical procedure, drug or human reproductive material, such as sperm, eggs or embryos. A conviction is punishable by six months to 2 1/2 years in prison, with a fine of up to $10,000.

The law makes Indiana one of the few states to regulate donor conception. …

But Dr. Fox, the law professor, thinks the laws should go further. He has proposed a new concept: “confounded procreation.”

I don’t exactly know what “confounded procreation” means, but it’s helpful for Sapir-Whorf reasons to have new terms. This is a pretty good example of an issue where everybody recognizes that something isn’t right, but the legal system hasn’t had the words to articulate the problem, so nothing much gets done about it. Now, though, Dr. Fox comes up with “confounded procreation” and we can nod our heads and point to it as what we’re talking about.

Courts would recognize the loss when reproductive choices are confounded, or compromised, by the negligence or wrongdoing of others.

In an early test of this concept, the Supreme Court of Singapore in 2017 heard a case involving sperm that was accidentally switched by a fertility clinic, resulting in a couple having a child of mixed race.

The court described a new kind of loss — a loss of “genetic affinity” — and awarded the couple 30 percent of the costs of raising the child, about $233,000.