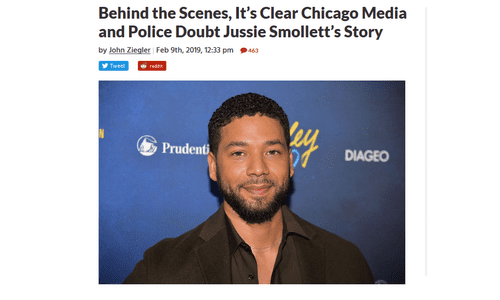 Jussie Smollett Noose News: Neither Police Or Media In Chicago Believe It

There isn’t much that new on the noose front, but from Mediaite:

I can’t recall a large crime story where there was a bigger gap between what the police and media are saying publicly, and what they expressing behind the scenes, than the saga involving the recent alleged hate crime against actor Jussie Smollett. Similarly, there may not be a story where you can tell more by what has not happened, in comparison to what actually has occurred. …

Behind the scenes, however, based on conversations I have had with multiple people covering the story, there is a radically different take on what really did happen to Smollett. In short, there is near unanimity among police sources that Smollett’s story is very likely not true. And that even the media outlets still regurgitating the current “party line” don’t really believe it.

In my experience, most people are very bad at reading the tea leaves in these types of situations, and it often leads to very inaccurate interpretations of what is really going on. …

The first thing you need to understand about this situation is that, because of Smollett’s persona and the nature of his allegation, no one in law enforcement or the news media wants any part of publicly questioning his story. Everyone knows that if they make any sort of negative implication against a black, gay, liberal, celebrity, victim of a horrible hate crime, that they will be roundly and severely attacked, regardless of whether they turn out to be correct. …

Among other things, the police have made it very clear they have not yet found any proof of an attack, despite having almost all of Smollett’s movements on surveillance video. They have disclosed that Smollett would not give over his cell phone to verify his timeline of events. They even published photos of “persons of interest” that they had to know were going to be universally mocked for being obviously irrelevant.

In my view, none of those important revelations would have been made public in the way that they were, unless there was extreme suspicion within the police force that Smollett’s story was not fully accurate.

By extension, media figures would not be being told by their police sources, as I have been told is currently happening both routinely and with vigor, that the authorities are acting on the assumption that they will never find any evidence to fully substantiate Smollett’s story. This isn’t just happening via idle speculation either, the police are doing so with great specificity, even including an alternative theory for what really happened (current attempts to find the origin of the rope found around Smollett’s neck long after the event was over are believed to be the most likely game-changer, if there ever is one in this case).

A few points: besides the national media not recognizing the recurrent existence of hate hoaxes, there also seems to be little recognition that local police forces have had a good record not losing their heads over them. People lie to cops all the time, so cops tend to be highly cynical about BS stories, even when the liars tick off currently fashionable talking points about who the putative Bad Guys were.

A lot of the most publicized hate hoaxes aren’t intended to be anti-white or anti-male hoaxes, they are just people making up stories for very personal reasons. E.g., UVA coed Jackie Coakley didn’t catfish Haven Monahan into digital existence to Stick It to The Patriarchy. She did it to make a boy she liked feel jealous enough to want to be her boyfriend. And hers was never a carefully worked out plot with no inconsistencies: for example, in Sabrina Rubin Erdely’s tapes of their conversation, Jackie constantly changes the name of the fraternity house she is accusing. But Jackie was at least clever enough never to tell her stupid story to a bunch of 95 IQ cops, just to a famous magazine.

Second, just about anything involving 21st Century white people and nooses is fiction. I can recall being puzzled by what seemed like the first injection of nooses into The Narrative: the 2007 Jena HS football players brouhaha. Six star black football players in the small town of Jena, Louisiana had been running amok due to their Football Privilege (a useful but unknown concept), and finally got arrested for beating an unconscious white kid. The DA overcharged one and it became a giant national story with both Al Sharpton and Jesse Jackson flying in.

The narrative went that the unconscious white kid deserved it because of endemic racism at his high school, as proved by other students hanging nooses a few months earlier. The white kids were baffled: they had done decorations for a party on a Cowboy theme. To the white kids, a hanging tree was a Western thing, like in the funniest segment in the Coen Brothers’ current movie The Ballad of Buster Scruggs where James Franco plays an 1873 bank robber whom the respectable citizens keep trying to hang for his crimes. Are the Coens racist for oppressing all their several dozen black fans by showing James Franco with a noose around his neck?

By current year standards, of course the Coens are racist. But it was all pretty baffling to whites back in 2007.