Modern Spain was formed in the fifteenth century, brought about by the royal marriage of Isabel of Castile and Fernando of Aragon, leading to the union of Spain.

Isabel and Fernando kicked out the Moors and sent Columbus west, beginning the conquests which would build mighty empires and create the Latin America of today.

If, however, Isabel had chosen to marry Alfonso King of Portugal, as some wished, then Portugal might have wound up being part of Spain and Aragon might have remained independent.

Historical “what if?” questions are interesting, especially now that the comunidad autónoma of Catalonia, part of the old kingdom of Aragon, may (or may not) become independent of Spain. 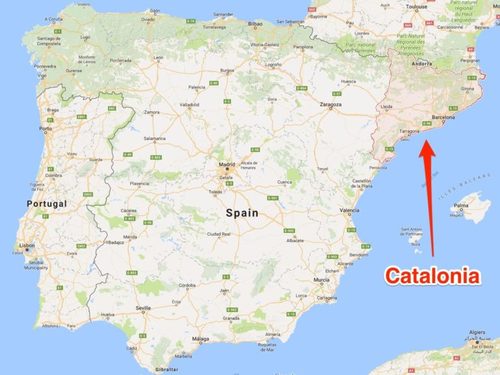 Catalonia, in the northeast corner of Spain, is rich and industrialized, and its capital Barcelona is the center of the Spanish publishing industry. Catalan people feel they don’t get back as much from Spain as they contribute. And they’re right.

The Catalans have their own language, also Latin-based but definitely distinct from Spanish.

Nationalistic Catalans simply feel they are not Spaniards. They even banned bullfighting, an action that is difficult to imagine in Andalusia.

The central Spanish government, though, doesn’t want Catalonia to secede. Besides losing much tax revenue, a Catalonian secession might inspire other restive tribes in the north to withdraw from the Kingdom of Spain.

The Basques, whose ancestral language is a language isolate unrelated to any extant language on earth, would be prime suspects. After all, there’s been a longtime independence movement among the Basques, including a violent terrorist wing.

Then there are the Galicians, whose language is really a form of Portuguese, and maybe the Asturians. If Spain began disintegrating, even the southern Andalusians might want to secede. Who knows?

I can appreciate both points of view. It’s yet another knotty National Question in today’s world.

That doesn’t mean, however, that 90% of the residents of Catalonia want independence. Less than half the voters in Catalonia voted.

Pro-union Catalans boycotted the referendum, and since the Spanish police were there roughing up voters, that means that it was really the most dedicated independence supporters who showed up to vote.

On October 10th, Catalan leader Carles Puigdemont (pronounced pootch-da-mon) gave a speech in which he said Catalonia had won the right to be independent but independence would await talks with the central government.

The next day, Spanish President Mariano Rajoy issued an ultimatum.

If Carles Puigdemont confirms by Monday [October 16] that he has [declared independence], he will be given a further three days to withdraw the declaration [until the 19th]. Failing that, Madrid will invoke Article 155 of the constitution allowing it to suspend the region's autonomy and impose direct rule.

As for the aforementioned article in the Spanish Constitution,

Article 155 has never been used before, so we are in a kind of Brexit situation before Article 50 [of the EU] was triggered. The article [155] legally exists but there are disagreements about how far-reaching it is, how it would/should work (and how quickly) in practice.

So the Spanish government is in undiscovered territory. Plus, what would be the practical effects of such a move?

Reports in Spanish media have suggested that if the Spanish prime minister were to activate Article 155 in the absence of a response from the Catalan president, pro-independence parties in the Catalan parliament would then declare independence.

In other words, by taking away the collective rights already enjoyed by Catalonia, it might drive more Catalans into the independence camp.

Meanwhile, there’s turmoil in Catalonia, as anti-independence residents have made their voices heard as well.

But if Catalonia does formally secede, what will the Spanish government do to prevent it?