What sort of morally corrupt, irresponsible government could purposefully release thousands of dangerous foreign felons — a reckless act that clearly endangers the people? It’s one thing for Obama to close White House tours to magnify the effect of a small cut to the growth rate of government spending, but quite another to put public safety on the chopping block for imagined political gain. 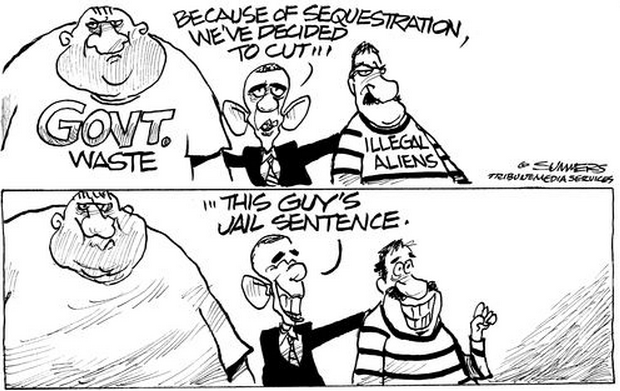 The sequester release of detainees slated for deportation has perhaps gotten more of a response than was anticipated. More than three dozen members of Congress sent a letter to DHS Secretary Napolitano calling on the agency to stop the releases and characterizing the act “unprecedented and dangerous.” Officials like Arizona Governor Jan Brewer and Pinal County Sheriff Paul Babeu have demanded to know who was let go and where.

The public outcry has forced the administration to make tiny retreats, like re-arresting four criminals it had let go a few weeks earlier. Information is dribbling out in small quantities, so the citizens won’t get the big picture about the sort of thugs Obama loosed into American communities.

And why weren’t the dangerous foreign convicts simply deported as the law requires?

More than a third of the 342 illegal immigrants released from detention facilities in Arizona last month were convicted criminals, and one of them was categorized as a Level 1 offender, the highest risk, according to data released by the federal government Friday.

The new information also showed that U.S. Immigration and Customs Enforcement released more people in the state than the 303 originally indicated by ICE, and for higher-level offenses, said Matthew Benson, spokesman for Gov. Jan Brewer.

“This has become a moving target in terms of information provided by the federal government from the very start,” Benson said.

ICE officials refused to provide additional details about the criminal background of the Level 1 offender released in Arizona or to say why that person was released.

Brewer, along with Pinal County Sheriff Paul Babeu and Maricopa County Attorney Bill Montgomery, have been highly critical of the release of immigration detainees, saying they pose a threat to public safety.

The immigration detainees were released from four detention centers in Pinal County as part of ICE’s nationwide efforts to avoid a budget overrun ahead of the automatic federal budget cuts known as the sequester.

The governor and local law-enforcement officials have demanded that ICE provide details about the criminal backgrounds of the immigration detainees released in Arizona.

Benson said the agency so far has refused to provide all the information Brewer requested in a letter to Homeland Security Secretary Janet Napolitano on March 1.

The release of immigration detainees also incensed many Republican lawmakers in Congress who have accused the Obama administration of using scare tactics to avert the automatic budget cuts because President Barack Obama favors raising taxes to help reduce the ballooning federal budget deficit.

The figures for Arizona were announced a day after ICE Director John Morton testified during a House subcommittee hearing that, nationally, 2,228 illegal immigrants were released during a three-week period beginning Feb. 9, far more than the several hundred people ICE officials originally said were released.

In all, ICE released 10 illegal immigrants nationally who were classified as Level 1 offenders, including one in Arizona, three in Chicago, two in Miami, two in New York City and two in San Francisco.

The agency has since taken back into custody four of the Level 1 offenders after additional checks revealed computer errors indicating they should not have been released, Morton testified.

On Friday, ICE provided a breakdown that showed that of the 342 illegal immigrants released in Arizona, 122 of them were convicted criminals. In addition to the one Level 1 offender, ICE released 30 classified as Level 2, and 91 classified as Level 3, the lowest risk. The other 220 were non-criminals, the agency said Friday.

Those released remain in deportation proceedings under various forms of ICE supervision ranging from electronic monitoring to regular check-ins to personal recognizance.

Morton testified Thursday that ICE officials decided to release more than 2,200 immigration detainees in February to reduce detention costs ahead of automatic budget cuts known as the sequester that were due to go into effect on March 1. The agency’s budget calls for holding in custody up to 34,000 illegal immigrants per day, but in February, the agency was holding on average of more than 35,000 illegal immigrants per day, he said.