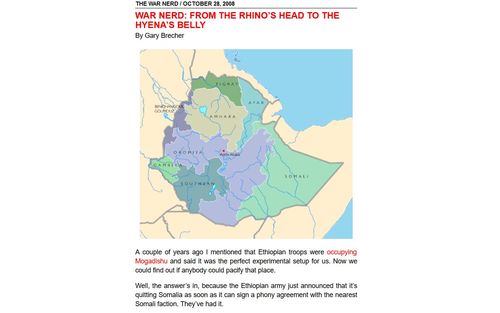 The War Nerd On Somali Culture

Naturally Somalis go for that Islamic noise, because compared to the basic Somali ideology, which is “Every man for himself and eat the losers” Islamic law is bleeding-heart liberalism. It’s kind of funny, imagining Somalis begging the mullahs, “Please institute Sharia law! We’re ready for that soft, easygoing hippie ‘tude! This Somali macho stuff, it’s too harsh!” See, when Islam spread from Morocco to Jakarta it washed over all kinds of tribes. For some of them, soft city types, Sharia law was scary, hardcore stuff. But to the Somali, who were used to fighting over a few starved goats all day, and then getting up tomorrow to fight over the same lousy goats all over again, Sharia law was the Rapture. “Wait, you are telling me that Sharia forbids stealing? No stealing? So I can sleep, maybe, with both eyes closed, for the first time in my life? Bring it on, baby!”

By all accounts, Mogadishu was almost peaceful when the Islamists were in charge. It was a little like the early days of the Taleban in Kabul: nobody gave a shit whether the Taleban was “democratic” as long as they kept the random gunfire down to a steady patter. Democracy is for rich people. I guarantee if you had to live like they do in Kabul or Mog, you wouldn’t care about it either. Not after ducking warlord-vs.-warlord streetfights every time you want to get water from the neighborhood pump. It wears you out fast, that kind of living—having to check for snipers every time you cross a street. A few years of that and you kind of look forward to a little Islamic fanaticism, where nobody’s allowed to do nuthin’, make any noise or hum a tune or fly a kite or whatever. It’s “Shuttup and siddown!” to the whole neighborhood, including the warlords and their khat-chewing skinnies who’ve been zooming up and down the alleys in their technicals blowing up kids because they can’t handle their high.

… That’s because what we see as a bloody mess that needs charity is natural to most Somalis. Not all—the Somalis actually used to have a rep as the best office workers in the Horn, believe it or not, under the colonial regimes. They’re not stupid people. But they are nomads at heart, and nomads don’t really have the idea of a central government protecting everybody. They want to protect themselves. Somalis actually live the way these survivalist wackos up in the Idaho panhandle think they live: all on their own, protecting their families. The way the Idaho nuts do it is all wrong, which any Somali or Bedu could tell them: you don’t hole up in a log cabin with a bunch of motion sensors and polish your gun collection all day like a sitting duck. You move, you and your goats. You keep moving, keep watch, and don’t trust anybody outside the clan. If you’re really going to do it you can’t do that single-family stuff. Too easy to besiege and wipe out. You need a clan. So the Somalis are organized in clans for mutual defense, hitting each other and running. Used to do it on livestock, then they met their dream car, the Toyota pickup, and never looked back. Mount a Soviet heavy machine gun or AA cannon on that thing and you were living the dream.

Meanwhile there were a few Somalis in suits and ties, trying to live the Western life in Mog. But the desert won, the old ways won. Somalia voted for the epic life, blasting away on your technical, not shuffling papers. Not good news if you were, say, a woman with three kids, but GREAT news if you were a khat-blasted eighth grader ready to pull that trigger.