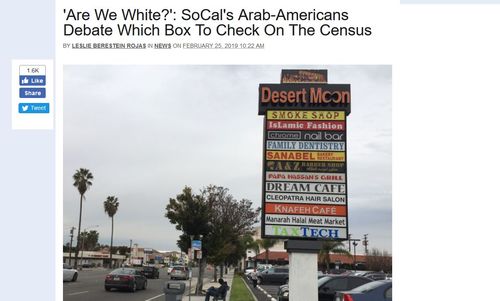 Flight from White Among Arab-Americans

‘Are We White?’: SoCal’s Arab-Americans Debate Which Box To Check On The Census

Until about a year ago, plans were moving forward to include a category in the 2020 census referred to as MENA, for “Middle Eastern or North African.”

It would have allowed a more accurate count of Americans of Arabic, Persian and other Middle Eastern or North African descent. In previous censuses, many identified as “white.”

But last year the Trump administration nixed that idea, announcing that the MENA category will not be included. …

She said the push for a MENA category is less about changing racial identity than it is about a need for Middle Eastern Americans to be counted accurately. But in recent years, the racial identity of younger generations has been changing – especially compared with that of their elders. …

The Sbaitas identify as Americans of Palestinian and Lebanese descent. That’s one thing they agree on. But how they identify racially is a different story.

In the 2010 census, Marwan, who is in his early 50s, said he checked the “white” box. He said it’s what he’s always been advised to do, for school and work, since he arrived in the U.S. more than 30 years ago. Besides, he said, he kind of likes it.

“It gave me some sense of pride to belong and be part of mainstream America,” Marwan said. “It catered to my desire to blend in, to fit into this society, to be the law abiding citizen, the taxpayer, the patriotic American.”

Aurora generally agreed with this perspective. But not Rania. At 19, she considers herself a “post-9/11 baby.”

Rania said she can’t identify with a group from which she feels alienated.

Unlike her immigrant parents, Rania, who also speaks Spanish, sees herself distinctly as a person of color.

The shift in racial identity started in the late 1960s, Gualtieri said. But it’s become more pronounced among the younger generation in the last 20 years – in the era of no-fly lists, travel bans and other strict policies aimed at Middle Eastern immigrants.

Aurora Sbaita said decades ago, the worst she might hear from people who encountered her was that she had “a cute accent.” Now, things are different. And that makes her perfectly happy just to check the “white” box and move on.

“It’s better to be blending in with the rest of the population rather than being cornered, if you want, or subjected to specific climates that [are] going on,” she said.

But what if she and her husband did have their own MENA box to check one day? Both pondered the question as Rania egged them on.

Marwan said he understood there could be benefits to being counted as a minority, including for his daughter. He turned to Rania.

“I don’t know,” he said. “Maybe I’ll do it for unselfish reasons, for the rest of the community to benefit, for your generation to gain the benefit. It could be.”