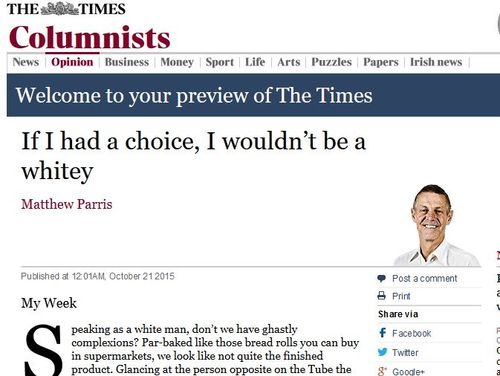 Unfiltered Ethnomasochism In The London TIMES

You don't often see white ethnomasochism as raw and unfiltered as in this piece by bigfoot Brit columnist Matthew Parris in the London Times yesterday.

Speaking as a white man, don’t we have ghastly complexions? Par-baked like those bread rolls you can buy in supermarkets, we look like not quite the finished product. Glancing at the person opposite on the Tube the other day, I thought “if only I could be that colour”. He was in his late thirties, maybe, south Asian, maybe Sri-Lankan; and his skin was that beautiful golden brown that whispers that this is how humans were supposed to look.

White is just wrong for skin — a kind of mutation, as though some key pigment was missing from birth. It looks inbred. I met a girl when I was younger called Weetabix (she said her rural Nigerian parents had wanted her to have an English name, and chose one at the general store) who described sleeping with a white man as being like “sleeping with a skinned animal”: semi-transparent with the blood vessels visible. The awful mental image has never left me.

And as you get older (if you’re white) you realise that a white skin is like a white carpet: it shows all the stains and blemishes. White youths enjoy a sort of mayfly summer, looking an enviable milky alabaster for about half an hour — before they blotch and smudge and scuff and smear and pimple and flush and rash and scratch and mottle themselves into shop-soiled old age. My number one colour would be caramel, closely followed by the almost inky black of the Turkana tribe I once travelled among in northern Kenya.

Come on, admit it, whiteys: if you were God designing the human animal, your brush poised above the divine palette, would you really go for just-crawled-out-from-under-a-stone off-white? Sallow sucks.  [If I had a choice, I wouldn't be a whitey by Matthew Parris; Times (U.K.), October 21st 2015.]

Weetabix, I should explain, is a breakfast cereal popular in Airstrip One for many decades.  It was my favorite as a child over there, mainly because the box featured a panel with shapes you could cut out, fold, and slot together to make a car or a truck.  (We didn't have iPads in 1953, you understand.)