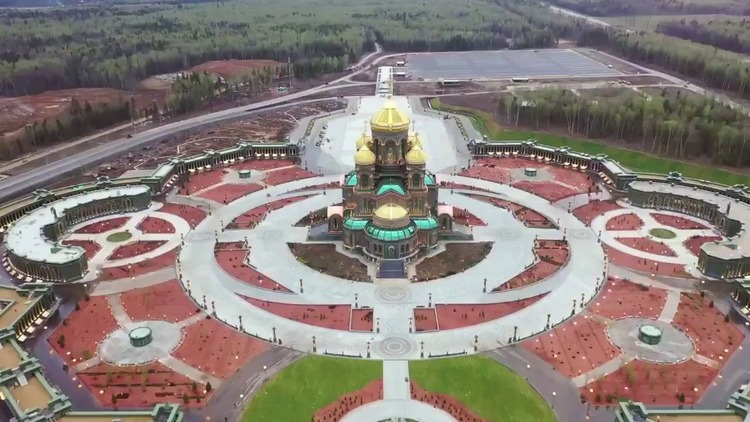 The Russian "Fortress-Monastery" And A Culture Of Pride

What confronts the West is chiefly a spiritual problem. Westerners, whites specifically, are told their culture is oppressive and immoral and that their replacement is a good thing. The conservatives, their supposed defenders, chiefly stick to economic arguments. Thus, even for "right-wing" whites, the appropriate things to defend are Big Tech, McDonald's and Disney. If you want to defend consumerism, keep in mind, this is what you are defending.

If you want to define "mainstream" American culture, well, that's it now. And don't expect most Christian clergy to say anything about it. The leadership of most mainline churches are firmly on board with the replacement agenda and far-left social causes. They are one of the leading forces in pushing mass immigration. This is an attack on our very souls, because the shepherds of the people are telling their flocks that they are evil and should be replaced.

It's not just that Black Lives Matter has become a religion. For arguments that it indeed is a literal religion, see The Next Great Awakening, by Edward Dutton, RadixJournal, June 27, 2020 and BLMania and the New Progressive Faith, by Gregory Hood, American Renaissance, July 29, 2020.

The bigger problem with BLM is that it has taken over existing religions. It is no exaggeration to say that for many "Christians," George Floyd is equal or perhaps superior to Jesus Christ.

Contrast this to what Russia has created, a magnificent cathedral that inspires people to greatness and duty, and leads them to reach for something sacred as part of that. It's something only a country led by people who don't hate themselves could create. America cannot make something like this anymore.

I visited the Central Cathedral of the Russian Armed Forces, just slightly less than a year after its consecration.

It is quite rare that reality exceeds visual media...

But the Fortress-Monastery does so, in spades, and that despite its already superlative neo-Byzantine steampunk aesthetics on screen, which are like something out of a Maxim Bedulenko painting...

The references to Warhammer 40K are not even whimsical. All around the complex, both inside and out, liturgical chants percolate through the air. The only things missing are the Cherubim fluttering amidst the Cathedral’s vaults...

The central apse features a metallic relief dedicated to the Resurrection of Christ. More than anywhere else, photos fail to do justice to what in real life looks like a divine being in 3D, a God-Emperor if you will, irradiating into the infinite blue, star-studded heavens...

One minor thing that you hardly notice—and that’s by design—is the painstaking attention to make everything fit congruently. The ornamental grillwork of the park benches corresponds to the patterns of the friezes on the Cathedral’s exterior.

[Pilgrimage to the Fortress-Monastery, by Anatoly Karlin, Unz.com, May 9, 2021]

Russia, of course, has its own problems with alcoholism, drug addiction, mass immigration, and other signs of social dysfunction. Yet at least there's a sense from its leaders that they love their country and are trying to build something positive. With our leaders, it's all about consuming the greatness of the past, picking the meat from already dead corpse.

The nationalist resistance in America is scattered and leaderless. We have no symbol or authority to rally around. Finding that will be a major challenge and one of my major goals. I hope we're building something like that with the Castle, an important first step. We can do more with your help.

The highest form of love is faith, and we'll need faith in our nation, culture, and people if America is to survive. Though we're fundamentally arguing about public policy, we're also talking about identity, and identity is as much spiritual as anything else. Giving people a purely negative identity, as America does to whites, is psychological torture. Giving them a proud heritage to live up to can inspire bring even broken people to greatness.